As Fare Increase Arrives, MBTA Commuters Lash out at #UnfairHikes

Riders begin a more expensive era on the T with a day of fury and campaigning. 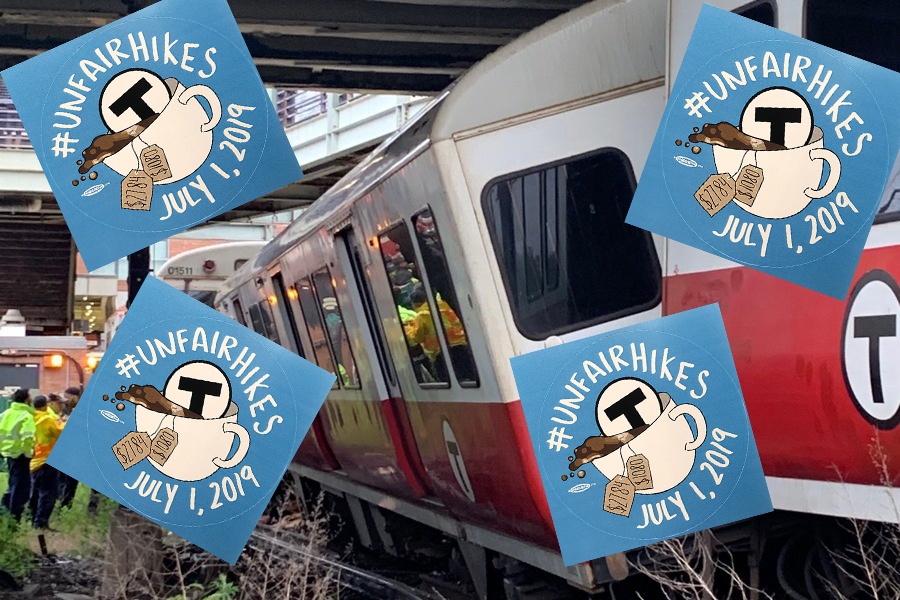 Commuters hopped on their trains this morning in a new, more expensive era for the MBTA, as the latest in a series of fare hikes took effect on July 1.

To mark the occasion, in an effort spurred on by Boston City Councilor Michele Wu, scores of transit activists, riders, and politicians greeted riders at T stops Monday and urged them to push for transit improvements and alternatives to jacking up fares. Other elected officials who canvassed at T stops for the morning commute, according to a list Wu has circulated, include city councilors Andrea Campbell and Ed Flynn, Cambridge Mayor Marc McGovern, and Somerville Mayor Joe Curtatone.

“The word that everyone has been using again and again is ‘ridiculous,'” Wu, a vocal critic of the T’s plan to raise fares who has gone so far as to call for abolishing fares altogether, told the State House News Service Monday. “Everyone I talk to is now either late every day or having to make unbelievable changes to their schedule.”

With @wutrain to oppose #UnfairHikes. The majority of D4 residents rely on @MBTA, esp. the Red Line, and it is unacceptable to raise fares when our trains are still severely delayed. Grab a sticker and join us! pic.twitter.com/2PBtbrVH1I

On Sunday, the day before the increase took effect, a crowd of about 100 gathered outside Park Street station Sunday for a “Boston T Party” rally, where they called for several measures they say would improve public transit without asking riders to pay more: increasing the gas tax, adding a resident representative to the T’s Fiscal and Management Control Board, adding bus-only lanes, adopting congestion pricing, and tacking new fees on ride-sharing service trips.

Tim McCool, who I spotted handing out leaflets at the Mass Ave stop on the Orange Line Monday, was one of what he says are about 250 volunteers fanned out at T stops today. He handed out baby blue stickers featuring the #UnfairHikes hashtag and a drawing of an overflowing teacup, along with instructions to post selfies with them on social media and contact their representatives in state government.

“People think I’m just handing out ads,” McCool says. “But when they find out it’s about making the T better their eyes are lighting up.”

Monday marks the first day of a 6 percent average fare increase for the system—a hike of 15 cents to $2.40 per ride on the subway with a CharlieCard (or $2.90 with a CharlieTicket or cash), or as much as $27.75 each month for riders at the outer reaches of the commuter rail.

I was at Alewife this AM talking with riders about the #UnfairHikes that start today.

And about steps to better transit, including:

Frustrations with the T have run even higher than usual after last month’s Red Line train derailment, which has disrupted commutes and caused delays that are expected to last for weeks.

MBTA officials rejected calls to delay or cancel the planned fare increase, which the T’s oversight board approved in March. It’s expected to bring in about $30 million in additional revenue in its first year. Following the Red Line incident, Boston Mayor Marty Walsh joined in the outcry against fare hike after previously supporting it.

Boston needs a seat on the Board to fight for Boston residents to finally have public transit that gets them where they need to go, when they need to get there — a service that they are already paying for & that they deserve. – MJW

We know it’s hard to see the progress of our capital investments as you ride the system, but tangible benefits like new Orange Line cars and the re-opening of Wollaston station are around the corner. pic.twitter.com/B2RrW9GqV9

The “T Party” leafleting and social media campaign comes amid speculation that Wu, the city councilor, might be teeing up a run for higher office, potentially the mayor’s. In a Boston Globe story out today that explores the topic, Wu said only that she is running for re-election as an at-large city councilor this year.

Paid the new rate of $90 for a monthly @MBTA pass just to deal with constant delays, derailed trains & broken infrastructure like this seen at Park Street this morning #UnfairHikes @wutrain pic.twitter.com/6ABJ6Lp1zw