What Boston Loses When Winter Warms Up

We've seen mild temperatures and almost no snow all winter long. It's hard not to feel like something is off. 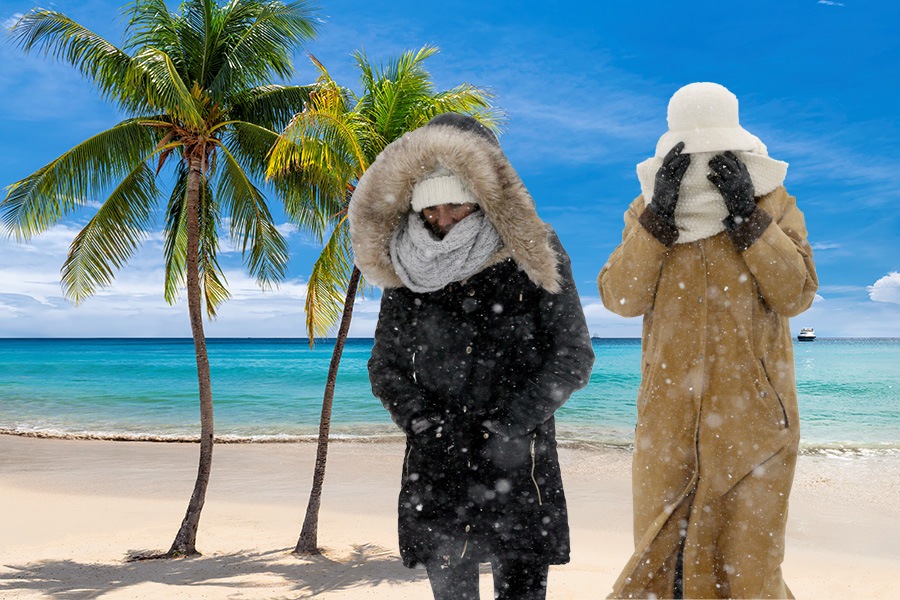 It’s not your imagination—it’s February, historically the most miserable month, weather-wise, to live in Boston, and things simply…aren’t that bad. A storm on Thursday dropped barely any snow before transitioning into rain, and prior to that, it’s been above freezing for what feels like weeks. While the meteorologists aren’t quite willing to declare winter over yet (remember the year we got 100 inches of snow in February alone?), I’m willing to go out on a limb and declare that this cold season has been a certifiable dud. We’ve had almost no measurable snow, and all signs point to this month, January, and December averaging warmer than usual. And these temperatures, at least, are no fluke—while this may have been one of our snowiest decades on record, it was also the warmest. “We’re going into winter later and we’re coming out earlier,” freelance meteorologist Dave Epstein, who can be found at WBUR, the Boston Globe, and WBZ, says. “Mild winters are not new. But what’s probably going to happen with climate change is that these types of winters will become more frequent, while cold, then eventually snowy, winters will become less frequent.”

Even within the coming decade, Epstein says, milder winter temperatures, like the ones we’re experiencing now, could become more common. I, for one, am happy to let my thickest coat gather dust in the closet. But a part of me does wonder: Is a critical part of our identity as Bostonians quickly melting into a gray, slushy pile?

Before I moved here for college, I made one very important purchase: a pair of perfect, Thinsulate-lined, tawny-colored L.L. Bean duck boots. I had, at that point, spent a total of one day in Boston, and knew next to nothing about the city I had committed to spend the next four years in. One thing, though, was certain: My new home was going to be cold, and these stiff leather coastal trophies chafing at my calves were going to protect me.

Take it from a native Midwesterner who has since endured hours of small talk about my life in Boston: The first thing many people think of when it comes to this city is the record-breaking, darkness-shrouding, seasonal-depression-inducing cold. It’s a reputation that’s been under construction for years. Famed Mass. residents Robert Frost and Louisa May Alcott exported descriptions of snowy woods and white Christmases to the masses. The AFC path to the Super Bowl for many years infamously passed through freezing Gillette stadium. And pretty much every Hallmark holiday movie is set in a fake Canadian rendering of New England, complete with evergreens, icicles, and plot-twisting snowstorms.

Meanwhile, we’ve also had a number of real-life blizzards that have made national headlines. Thursday’s dud of a storm may not have left much of an impression, but 42 years ago on that same date it was a very different story. During this week in 1978, snow fell at a rate of 3 inches per hour, thousands of cars got stuck on Route 128, homes were destroyed, and some area schools were closed for over a week thanks to the now-infamous blizzard. It was an epic weather event that solidified Boston’s wintry reputation in modern memory.

“If we never did get any really cold weather or sizable snow this year, that would seem unnatural to me,” says WCVB meteorologist Harvey Leonard, who has been forecasting in Boston since the 1978 blizzard. “It would seem like we haven’t earned the right to go into spring. You have to feel like you’ve endured something.”

To some, a 27-inch blizzard might sound like misery. But it’s a truth universally acknowledged that if you choose to live in Boston, you live for stuff like this. We would never say that, of course, because we much prefer to complain about the forecast, and only warm weather nerds get excited over the promise of snowfall. But for us, surviving through a truly nasty winter is a badge of honor (one that my Bean boots and I, by the way, earned during the snowpocalypse of 2015). Admit it: You crave the rage-high of opening your weather apps and seeing something just vile and outrageous. You spend a little too much time picking out the perfect, eye-catching space saver to reserve your shoveled-out parking spot. And every time a dramatic snowstorm is predicted, there’s a dark little corner of your soul that wants to get snowbound at your office, where you’re forced to subsist on vending machine fare and ice water alone, crystallizing a New-England-tough anecdote that you can spend the rest of your life casually slipping into conversation.

But Boston winters are more than just good for testing and proving our heartiness—persisting through the winter here is also a communal (albeit pretty obligatory) experience. Bostonians aren’t exactly known for being a warm and fuzzy people, but that’s just because our citywide bond doesn’t reveal itself through silly courtesies like verbally acknowledging the presence of others or smiling. It’s revealed through our unspoken winter rituals, like when someone slips on black ice, falls down, and gets back up really quickly and everyone around them knows to just avert their eyes and pretend nothing ever happened. As we all lace up our boots, trudge through snowbanks, and silently retreat deeper into our coats as the MBTA quite literally crashes and burns in front of our eyes, we feel a spiritual connection to those who are doing the same.

It’s thus hard not to feel like we’re missing out on something as we greet day after day of 40 degrees and clouds. If this becomes our new reality, we’ll be able to pack our thermals away for good—but at what cost? Drinking iced Dunkin coffee in January will just feel … normal. We won’t be able to hide our wintertime figures beneath copious layers. Snow creations will become a lost art. Flirtatious snowball fights? A thing of the past. Commiserating with your neighbors about shoveling? Forget about it. Snow yeti? Extinct. Sure, it’s nice to get prolonged exposure to the elements without feeling slightly hypothermic afterward—but for a true Bostonian, where’s the fun in that?