Why Are We So Obsessed with the Orange Line Bridge Diver?

An act of sheer athleticism in the midst of a crisis has caught everyone's attention. 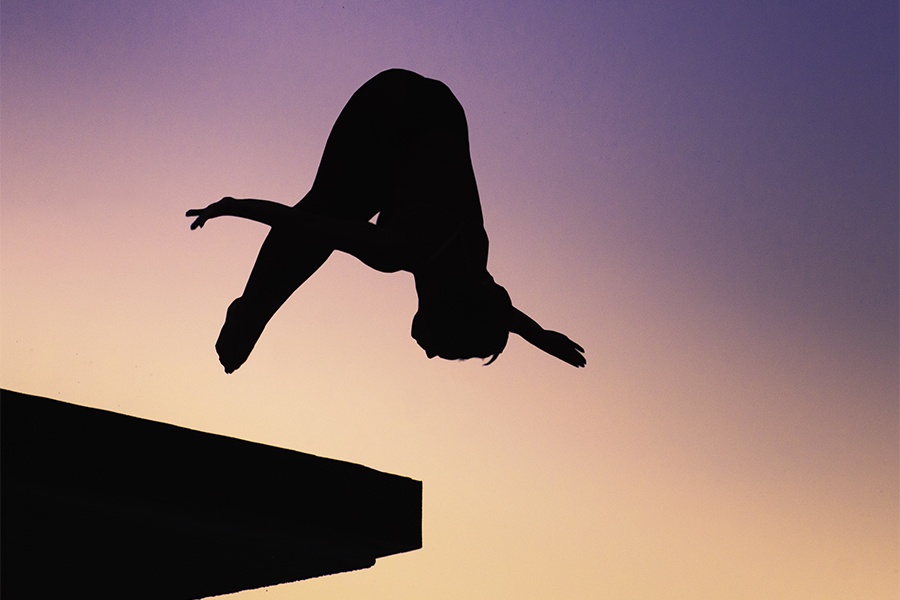 In the midst of an unusually eye-catching story about an MBTA mishap on the Orange Line this week, there was a lot to take in: video of flames and billowing smoke on a train parked midway across a bridge high above the Mystic River, unsteady footage from passengers recording their hasty exit from the train, the scene of a woman leaping to safety into the arms of a very muscular man. There were endless videos to watch and endless hot takes pointing fingers at various people over the T’s current state of disrepair. But when I read a Boston Globe story about the bedlam, I was particularly riveted by a four-sentence quote from Somerville Fire Chief Charles Breen, who was responding to reports that someone had chosen to evacuate the fiery train not by walking to safety along the tracks, as the other passengers were doing, but by leaping into the Mystic River more than 30 feet below.

“An unidentified female passenger jumped off the bridge into the river,” Breen said. “Our marine boat happened to be in the river for training and was on-scene immediately. The woman refused to get into the boat. She was provided a life jacket and proceeded to swim to shore . . . then she walked away.”

I couldn’t get over it. For one thing, as a lifelong terrible swimmer, I recognized that the athletic ability on display here is beyond my wildest dreams. The confidence of the dive! Refusing a lift to shore! And then, once it was over, simply walking away into the distance and vanishing. She also reportedly refused medical attention. Transfixed, I excerpted just that quote and shared it on Twitter. Had an Olympic-caliber swimmer just casually high-dived off of the Orange Line?

Simply obsessed with this anecdote from this morning’s Orange Line incident pic.twitter.com/5B4JIVHKx1

Then, as you may know if you’ve spotted this article, other people started sharing the tweet. Hundreds of them. Most, like me, were awed by the personal sang-froid suggested by evacuating a fiery train with such dramatic flair, leaping probably 30-feet off a bridge, swimming a quick lap in the Mystic, brushing off any help, and then strolling away as though there was nothing to it. Others, though, saw something more nefarious, casting wild accusations that the mysterious Peter Pan must have had drugs on her (those would be some very damp drugs at this point, my friends). One person even pointed out the possibility that she was an undocumented immigrant, and thus that sang-froid came from the deep and painful necessity of avoiding contact with law enforcement, even in a case where she’d done nothing wrong and could have been injured. My favorite reading of the incident on social media was that the woman’s apparent casual derring-do stood as a testament to the notoriously gritty and unruffled stoicism of the New England character, with a side helping of weariness over the MBTA’s parade of misfortunes in recent weeks.

So far, the woman has remained anonymous. From what I can tell, only WBZ has managed to track her down for a quote. She didn’t tell them her name, and didn’t go into much detail:

“I was very scared for all of us,” said the woman, who did not want to be publicly identified. “We had no idea what was happening. It was like pandemonium. I think I’m safer in the water right now than walking down the tracks.”

Unfortunately for us, WBZ does not appear to have asked her if she is a lifeguard or an Olympian when she’s not busy riding the Orange Line. And to be fair, despite her refusal of assistance, she and all those other passengers had just gone through something truly terrifying, so it’s more than understandable that her first thought was not to boast about what a good swimmer she is. I don’t know any more about her than anyone else at this point.

Still, her desire to stay out of the public eye is part of what makes this story so captivating. It’s not just the incredible physical prowess (ma’am, if you’re reading this…are you Wonder Woman?), it’s the notion of a person doing something like this, gazing upon the imminent specter of viral fame, and declining it. As a society, we’re used to people cashing in (or, let’s be fair, cashing in ourselves) for even a hint of notoriety, and suddenly here’s a person who did something so notable that it rose above the fray of a flaming bridge train, and she doesn’t want to talk to us about it.

A legend lives among us, Bostonians. Don’t ever forget it.