This Southie Apartment Went From Cramped To Classy 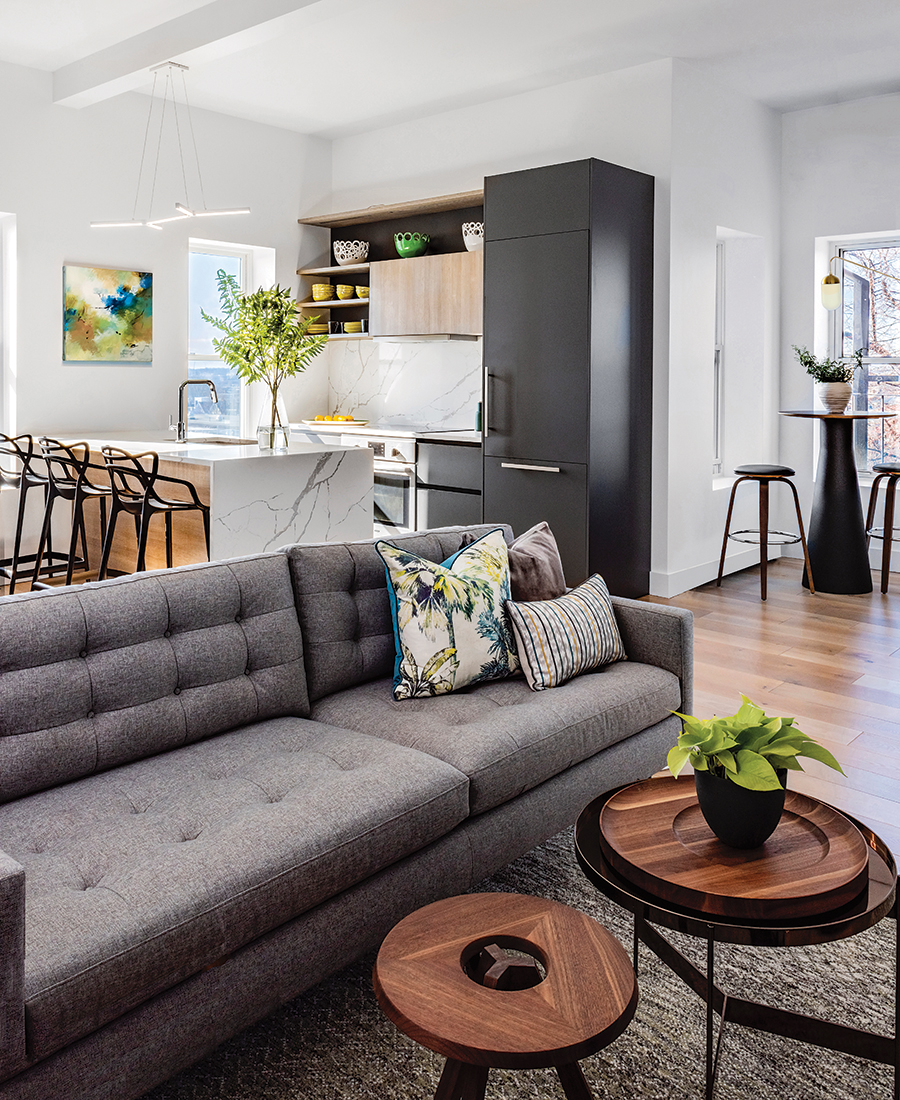 Jill Najnigier’s client wanted another wall. While he loved the views and open plan of his South Boston studio, located just a few blocks from the beach, he wasn’t keen on one-room living. “Space planning was a big piece of this renovation,” the designer says. “He really wanted a separate bedroom.” He also wanted to maintain the unit’s expansive feel—not an easy undertaking, given that it clocks in at 700 square feet. Luckily, the 12-foot ceilings helped, as did the client’s contemporary tastes. “[We] kept everything clean,” Najnigier explains. “Nothing chops up the space.” 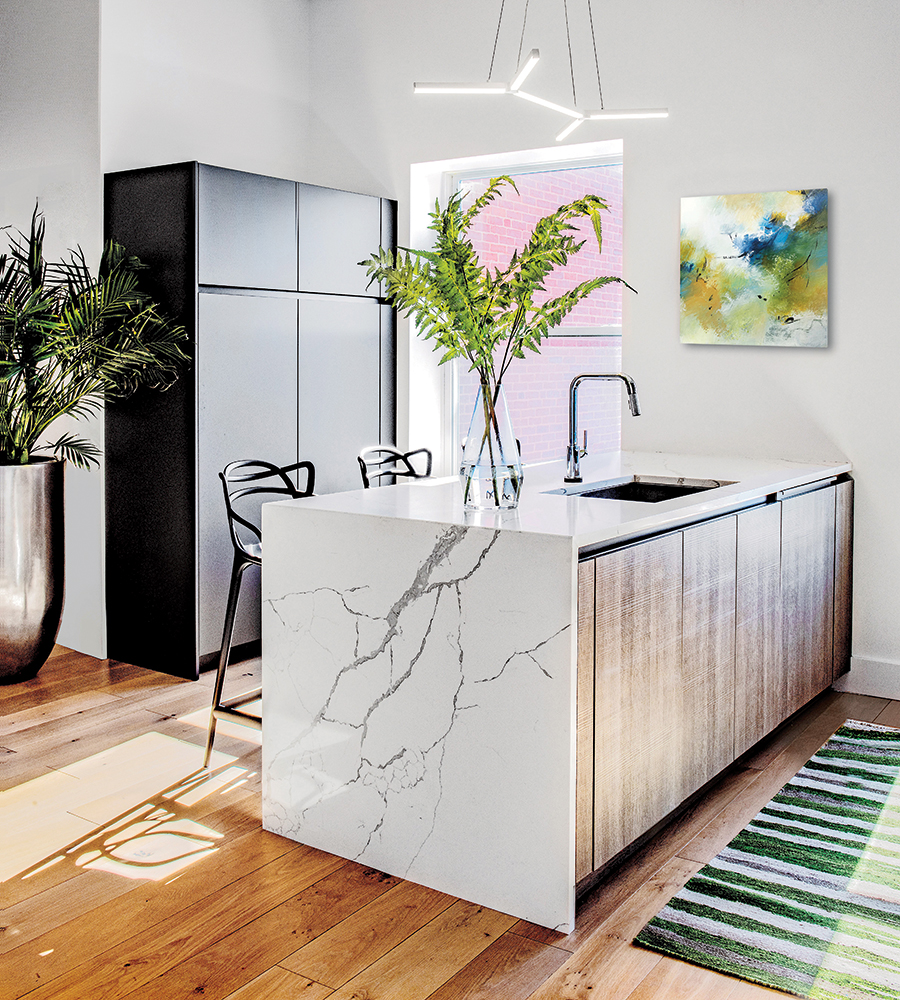 Set the Scene
Najnigier’s first (and most important) task? Defining distinct areas. She created a bedroom by shortening a wall that jutted into the main space and adding another wall perpendicular to it. That left enough square footage for a living area, a kitchen, and a dining space with a table that feel separate, yet connected. “He wanted [guests] to be able to sit and eat, and still be part of the group,” Najnigier says of the client’s wish for the dining area. There are city and harbor views from that corner, and the high-top table lends a festive vibe. 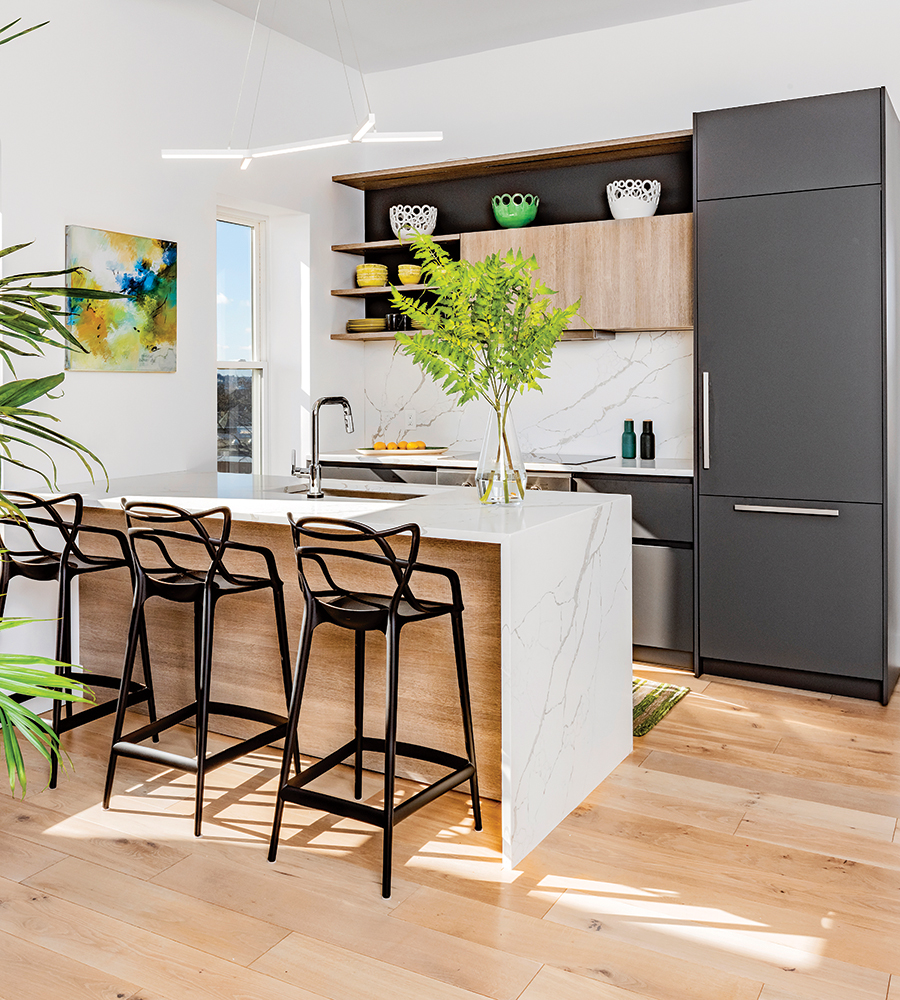 Create a Killer Kitchen
Samantha DeMarco of Divine Design Center collaborated with Najnigier on the sleek kitchen: the home’s focal point. “The eye is drawn right to the two [kitchen] windows when you walk in,” Najnigier says. Calling on Leicht cabinetry, the pair developed a scheme that hides the appliances and incorporates storage in a new waterfall-edge peninsula, which offers seating for three. To dress up the space, Najnigier skipped the hardware, relying instead on open shelves, sculptural counter stools, and a minimalist suspension light. 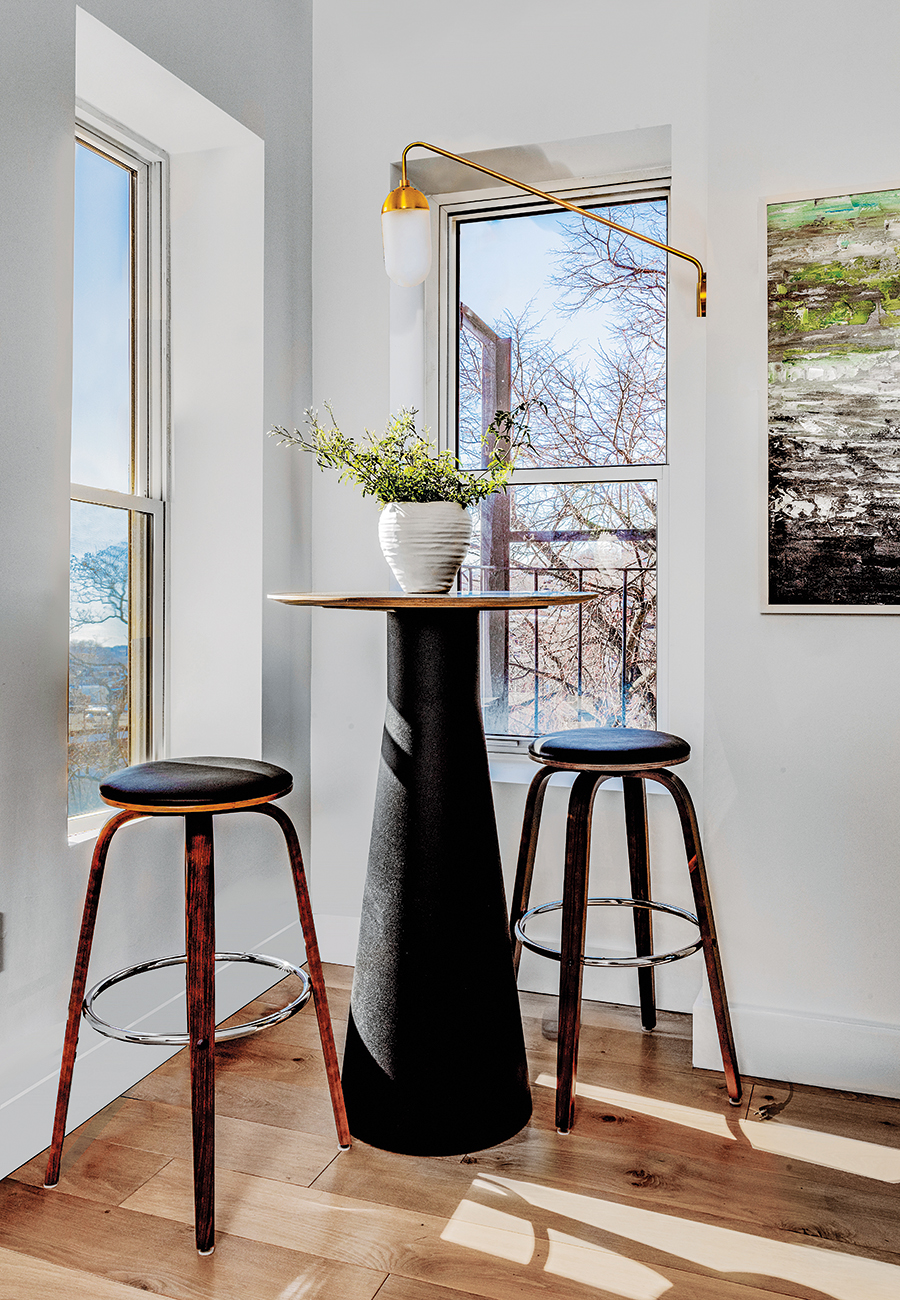 Unify Using Finishes
Knowing the unit’s overall effect would be spare, Najnigier used wood tones throughout the home to warm and connect the spaces. Taking cues from the European white-oak floors, the designer mixed matte-gray kitchen cabinetry with panels in a rough-sawn oak finish, installed with the grain running both vertically and horizontally. In the living and dining areas, meanwhile, Najnigier turned to rich walnut accents, as well as touches of burnished brass. “I don’t like everything to match,” she says. 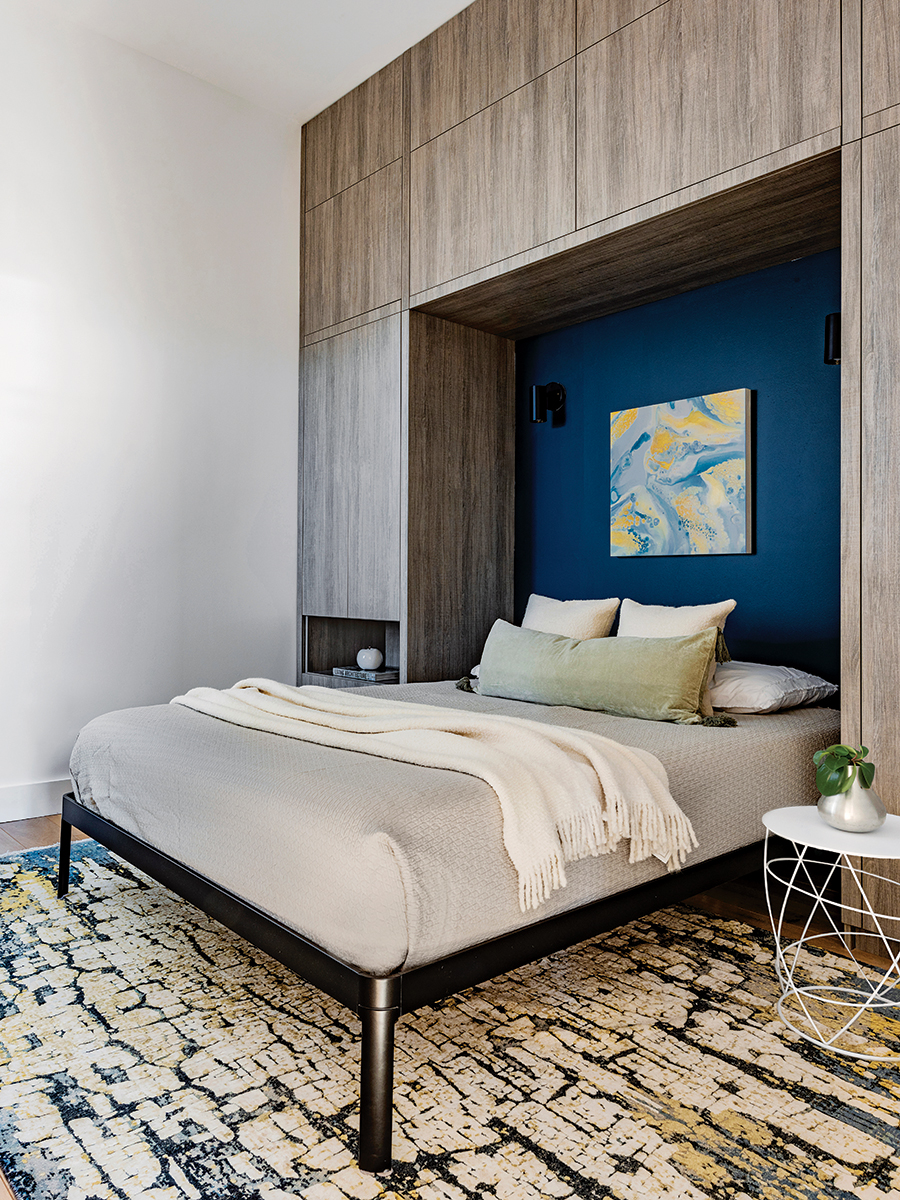 Splurge on Storage
Although the unit had nary a closet, Najnigier resisted building any; she felt the doors and trim would disrupt the smooth flow of the space. Instead, she counseled the client to devote a chunk of the budget to creative, custom storage solutions—including a wall of built-in cabinetry, crafted by Scavolini, in the bedroom. It houses all of the client’s clothing and boasts an integrated nightstand. “The piece feels very tailored and modern,” Najnigier says. 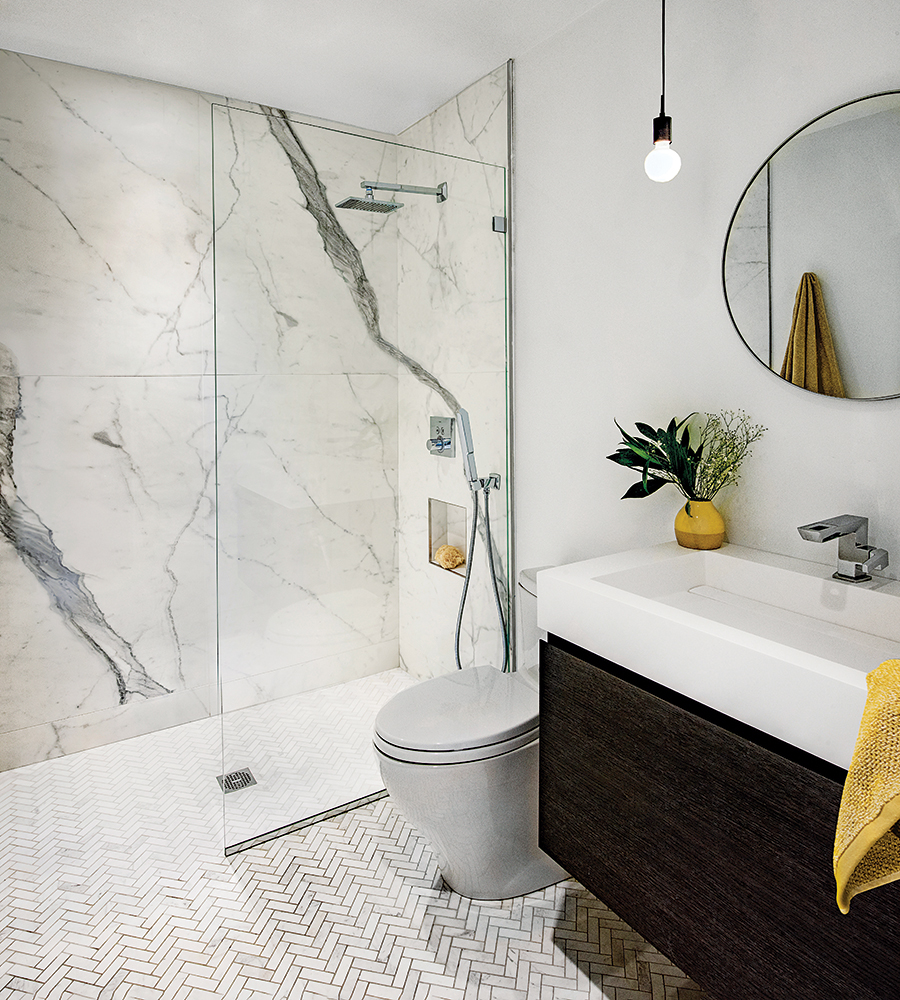 Blow Out the Bath
The homeowner also charged Najnigier with expanding the unit’s only bathroom. During demolition, the team discovered unused space behind the existing bath wall, usurping it to increase the size of the walk-in shower. The client agreed to go curb-less despite the cost, creating an uninterrupted expanse of marble mosaic tile on the floor. “It makes the [room] seem so much larger,” Najnigier says. 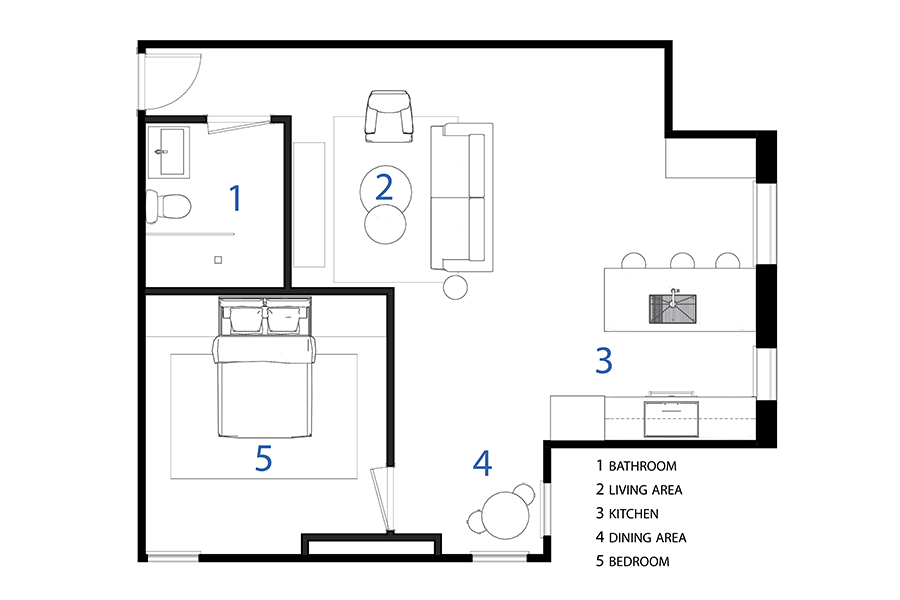