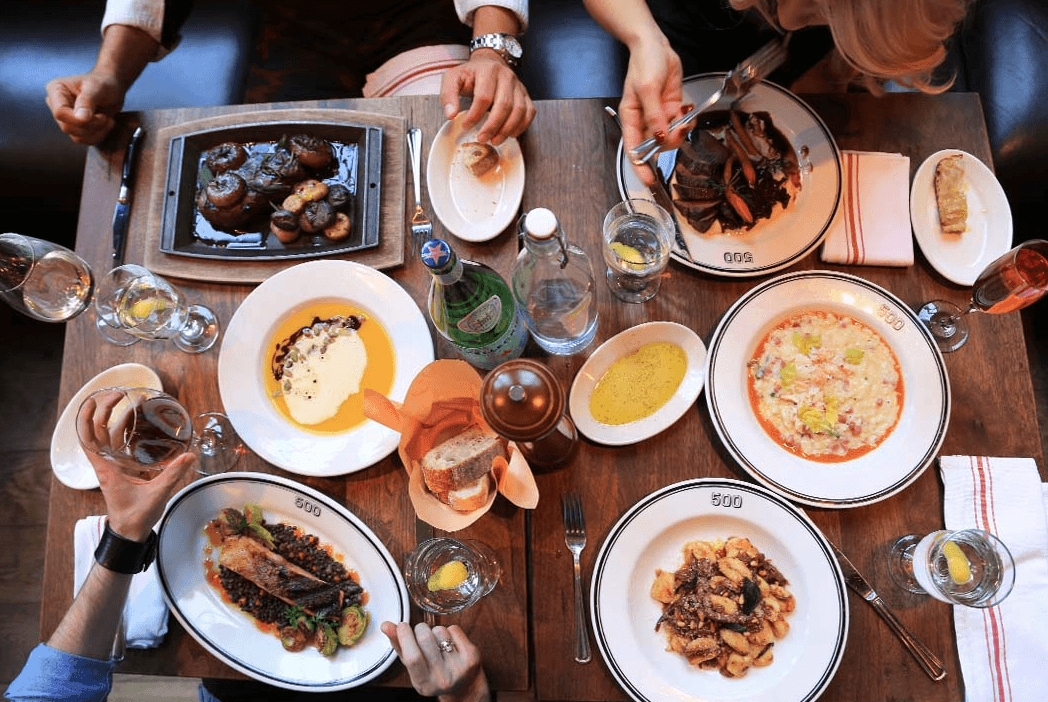 Need an excuse to cross off a few restaurants from your to-visit bucket list? Dine Out Boston returns this month with 12 days of affordable prix-fixe menus at dozens of Greater Boston restaurants. From Charlestown to Hyde Park, Cambridge to Milton, and everywhere in between, more than 150 chefs and restaurants are participating with $15-$25 lunch menus, $28-$38 dinner deals, or both. The Greater Boston Convention and Visitors Bureau, which started the event as Boston Restaurant Week nearly 20 years ago, has once again picked King Boston as its charity partner—which means a portion of your discounted dining-out budget will support the nonprofit’s mission to celebrate the legacies of Dr. Martin Luther King, Jr. and Coretta Scott King in Boston. Check out the list of participating restaurants and get on those reservations. 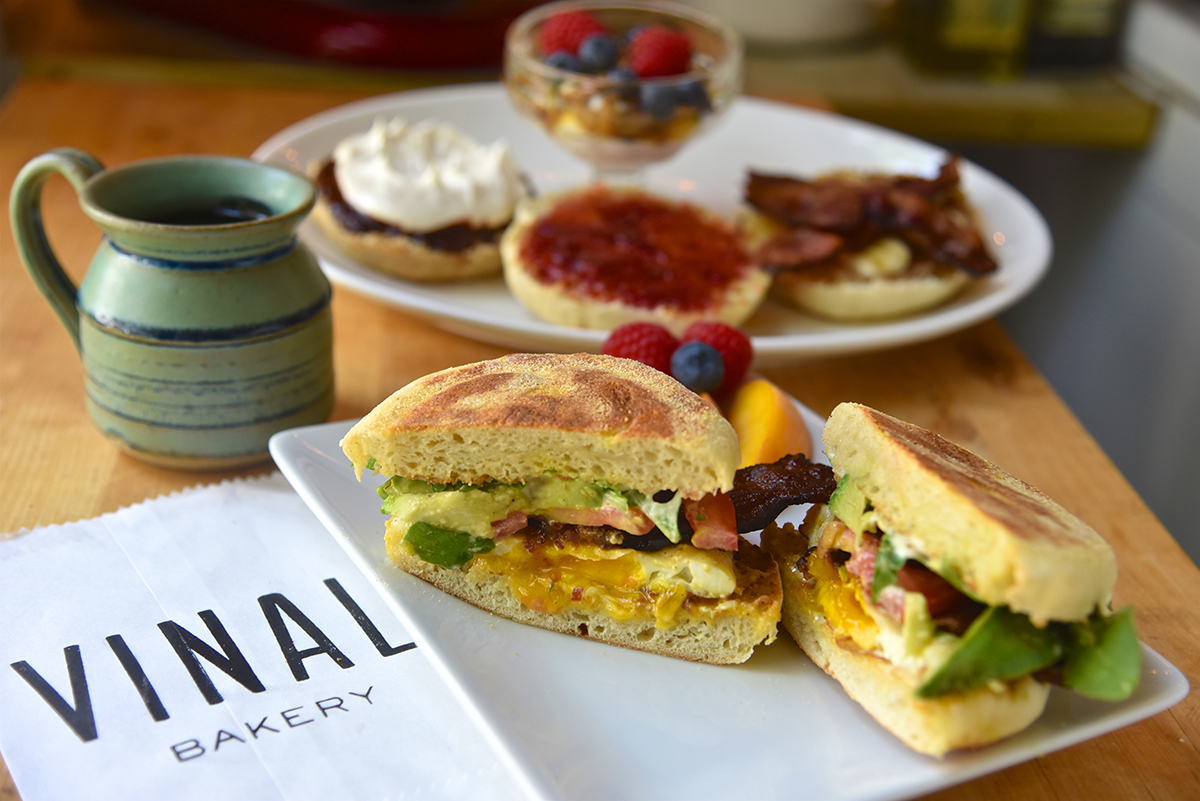 For more than a year, baker Sarah Murphy’s pop-up Vinal Bakery has been sharing delicious English muffins and more New England-inspired treats from the kitchen of Bagelsaurus every Tuesday and Wednesday morning. But Murphy is putting the finishing touches on a bakery of her own in Union Square, so her pop-up days are numbered. Before Vinal Bakery opens in Somerville this spring, it has two more weeks’ residency in Porter Square. Get there to try Vinal Bakery’s French toast English muffin, maple butter spread, and more before the forthcoming café opens. 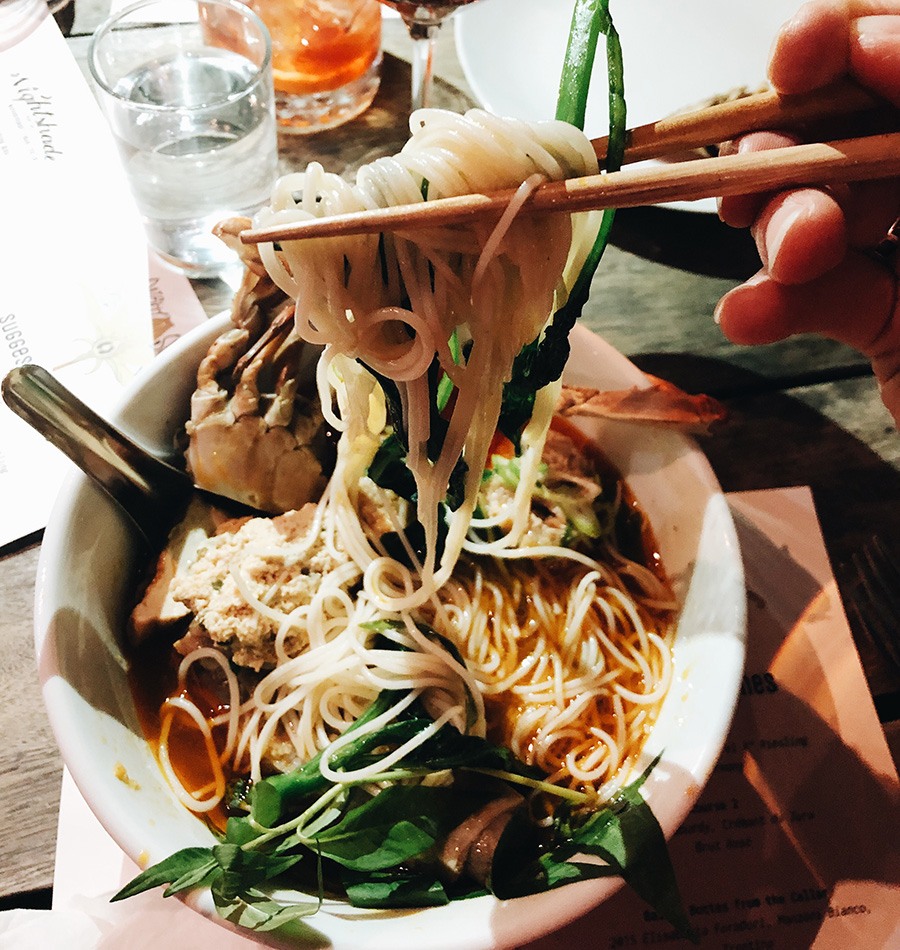 Another prolific pop-up is prepping a permanent place, but before Nightshade opens a noodle bar on the North Shore, chef Rachel Miller continues to bring her Vietnamese-inspired flavors to other local restaurants. “Hot Noods” continues every Monday night in March at Buenas Maxi Kiosko (at Bow Market). New this month: On Tuesdays, Nightshade noodles pair with small plates from the menu at Brassica Kitchen in Jamaica Plain. Make a Tuesday night reservation at the Forest Hills restaurant for a Nightshade Noodle Bar preview, or just walk in. The Brassica kitchen is open 5:30-11 p.m. 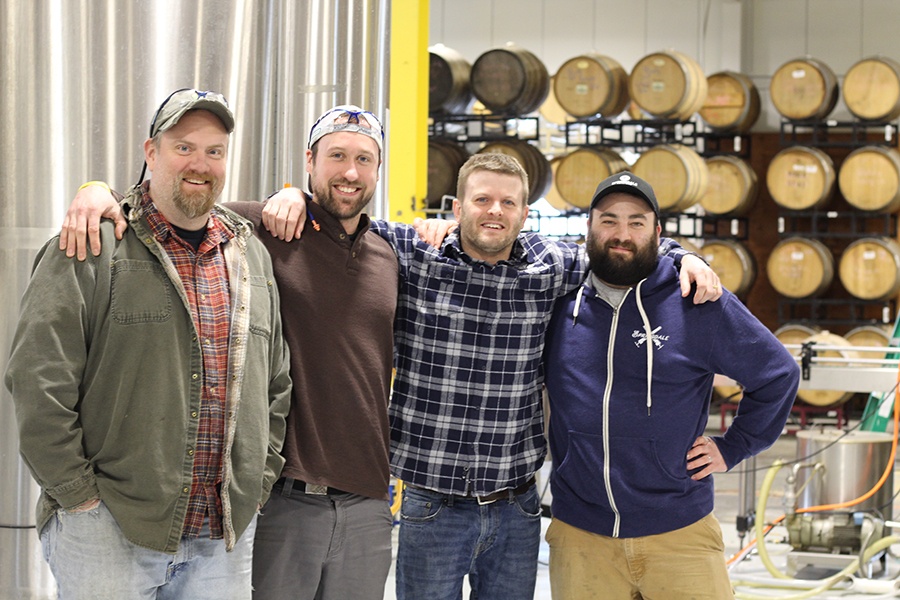 “In Herb We Trust”

This is actually an April event with some pre-planning required in March. This month, the beer families of Jack’s Abby and Springdale are mourning the loss of longtime friend and colleague, Herb Lindtveit, who passed away unexpectedly on February 20. Lindtveit was the company’s brewery manager since 2013, and a friend of cofounder Jack Hendler’s for more than 14 years. Lindtveit was also an alum of the Beer Works restaurant group, and thus had an impact on the wider local beer community as well. In honor of his legacy and in support of Lindtveit’s family, Jack’s Abby and other local breweries are making beers in Herb’s honor. A limited-edition Jack’s Abby lager called “In Herb We Trust” and TBA beers from Wormtown, Sam Adams, and Connecticut’s East Rock Brewing Co. will be released at a commemoration party at Springdale on Sunday, April 14. Pre-order a four-pack or a case of In Herb We Trust by Wednesday, March 13, and make plans to attend the celebration of Lindtveit’s life next month. All proceeds from the sale of the limited-edition beer will go to Herb’s wife, Erin; and their children, Herbie (20), Sarah (17), Emily (13), and Mary (10). 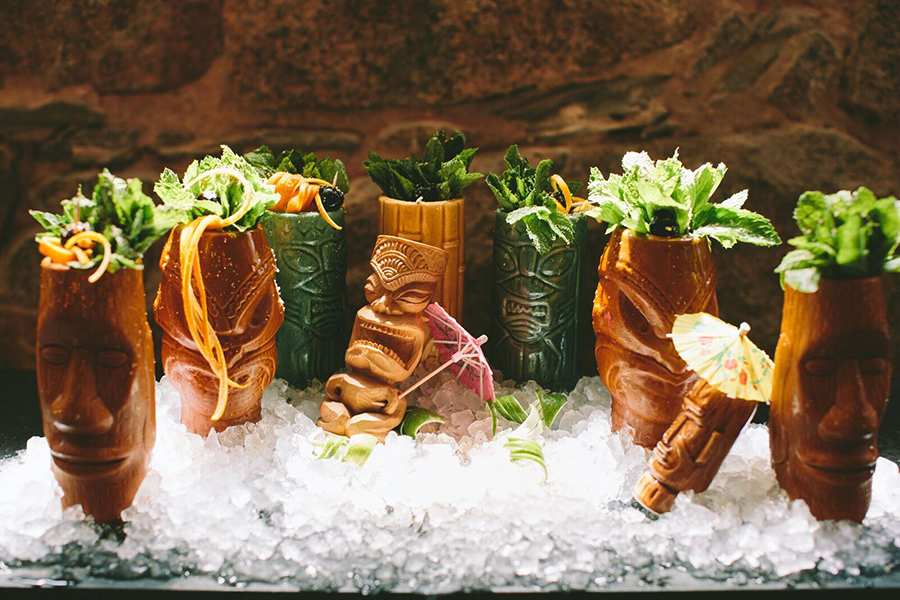 Every second Sunday of the month, the crew at Barbara Lynch’s cocktail bar, Drink, gets it tiki drink on. But for the first time this month, Tiki Sunday features a full-on kitchen takeover and islands-inspired fare. Guest chef Asia Mei of South Boston’s Moonshine 152 is dreaming up a handful of dishes to complement the cocktails. The menu is TBA, but with Moonshine menu staples like jalapeño crab Rangoons, and grilled stuffed avocado with green papaya salad, trust that you’ll be in great hands. No reservations nor tickets required.

Dishes from Kaki Lima. / Photo by Nina Gallant for “The Breakdown: A Taste of Indonesia“

Boston’s premier Indonesian street food can be found in Kendall Square this month. Kaki Lima is hosting four ticketed dinners at Mamaleh’s this month, all on weekend nights. Chef Retno Pratiwi has yet to announce the menu, but expect “the usual epic multi-course meals,” she says. Vegans and vegetarians will be accommodated—just make note when you purchase tickets. 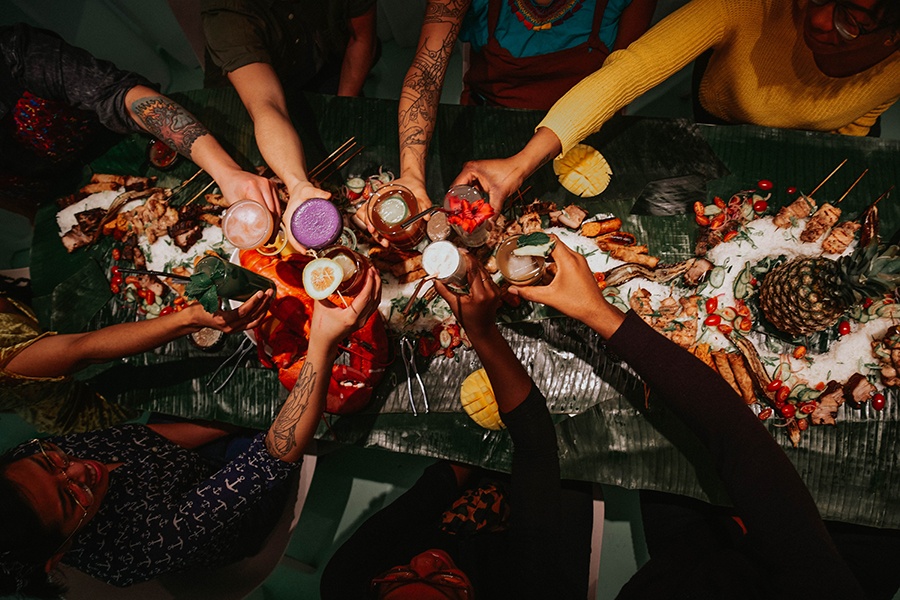 Smash the garlic and the patriarchy this month at Tanám in Somerville (pictured). / Photo by Rita Tinega

Smash the Garlic and the Patriarchy

It’s Women’s History Month, and that means it’s time to smash the patriarchy along with the garlic. “Smash the garlic and the patriarchy” is a clever phrase coined by Amy Larson, the founder of local culinary apparel brand Overseasoned. It’s also the name of a new publication from Overseasoned and GRLSQUASH, a biannual women’s journal about the intersectionality of food, art, and culture. Featuring stories, recipes, and insights from such chefs as Karen Akunowicz (Fox & the Knife), Ellie Tiglao (Tanám), Kelsey Munger (Lavender Bee Baking Co.), and more; beverage geniuses like Lauren Friel (Rebel Rebel Wine Bar) and Brienne Allan (Notch Brewing and Pink Boots Society Boston); and creative thinkers including food stylist Elle Simone and Project Runway winner Erin Robertson, How to Smash Garlic and the Patriarchy is “a shared mission to shout from the rooftops about all the amazing womxn in the Boston food and beverage scene,” Larson says. Preorder a copy of the magazine here (it’ll ship out in late March), and check out the launch party later this month at Bow Market, featuring drinks and vegetarian-friendly snacks from Tanám and Rebel Rebel Wine Bar. Tickets include a copy of How to Smash Garlic and the Patriarchy, snacks, and two drinks. 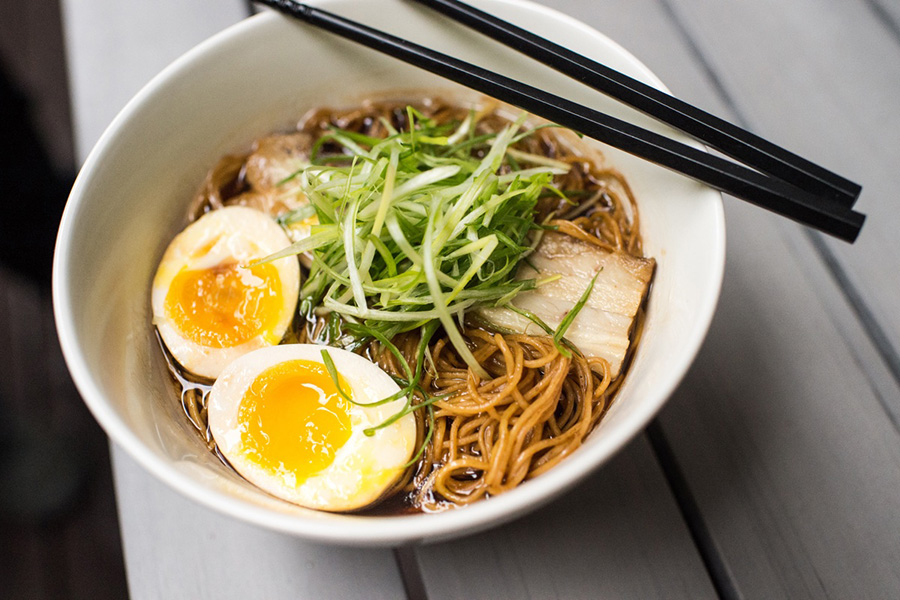 New York City chef Ivan Orkin is planning his third-annual trip to Uni: The world-famous ramen junkie is bringing his signature Tokyo shio ramen and more a la carte offerings to the Back Bay izakaya. (The Ivan Ramen chef is also crashing dinner service at Trillium Fort Point later this month, but those seatings have already sold out.) Orkin—a longtime chef-friend of Uni owner Ken Oringer—is offering pickled daikon XO, his signature soup, and spicy dan dan noodles at Uni, alongside a streamlined selection of sushi, sashimi, and global street food from Uni chef/partner Tony Messina. Call the restaurant to see about available reservations, but keep in mind that Uni is also holding a quarter of the restaurant for walk-ins. 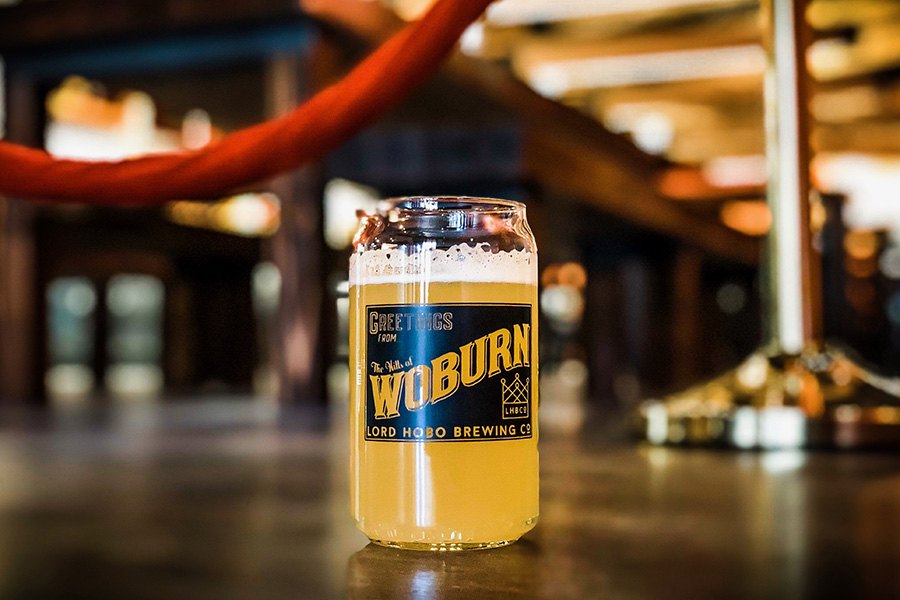 Two suburban spots are joining forces on a month-ending beer dinner. Matadora executive chef Stephen Coe, who joined the crew last month at the Hilton Hotel-side tapas spot, is creating a five-course tasting menu to pair perfectly with beers from Woburn neighbor, Lord Hobo Brewing Co. Chef Coe and Lord Hobo reps will be on hand to introduce each dish and talk about the pairing. Tickets include the multi-course meal, plus an arrival reception and a chance to win Lord Hobo swag.