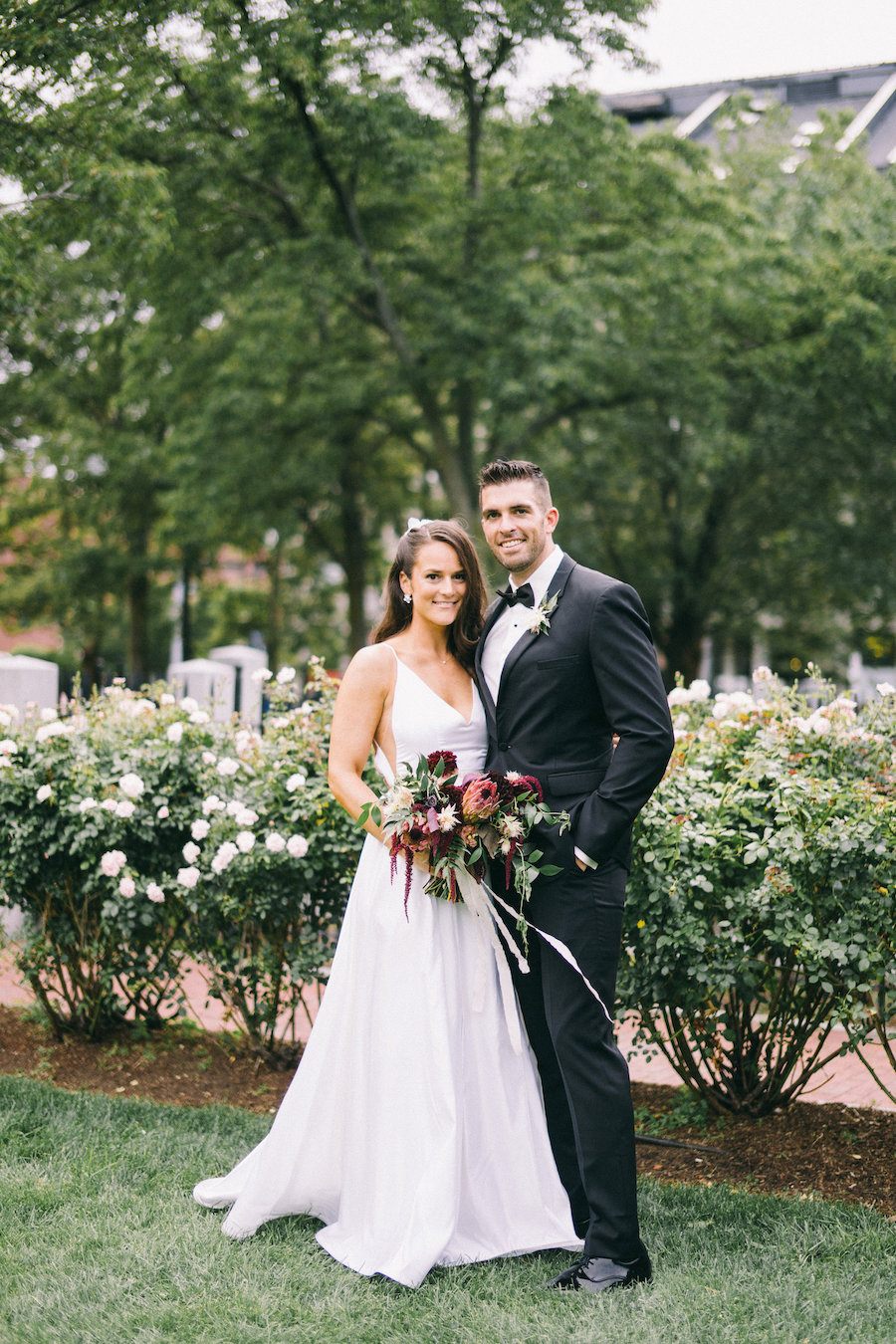 While Christopher Evans and Sarah Bolt cannot recall the moment they first laid eyes on each other, they do know that they met back in 2010, when they were introduced by a mutual friend. Both Massachusetts natives, they shared a similar sense of humor and enjoyed spending time together, but it wasn’t until the spring of 2013 that their friendship turned into something more. “We were out with a group of friends one night, and romance just blossomed. We started dating shortly after that,” Sarah says. “It was the right time. We were both available and had our careers and lives on a path.”

As the years passed, the pair grew closer and got to know each other’s families, who both live in the area. Then, in 2017, Christopher and Sarah were packing for a trip to Lake Winnipesaukee when Christopher announced that he’d written down some thoughts about their relationship that he wanted to share. “He read me a note, which I still have, and at the end he asked me to marry him,” Sarah says. “I was shocked. I immediately burst into tears and threw my hands over my face. I was like, ‘Are you kidding me?’ He said, ‘I’m serious. I’m holding a ring in front of your face.'” Adds Christopher: “I really wanted to have that moment to ourselves, that we’d be able to share between the two of us forever.”

When it came to planning their wedding, the couple knew that tying the knot in Boston—where they currently live in the Back Bay—was a given. The State Room, a downtown event space boasting skyline and harbor views, was the first venue the pair visited. They knew it was perfect instantly. “The view is just breathtaking,” the bride says. “You have an emotional response when you first walk in.” In the end, though, it was celebrating close to home with 200 of their loved ones that meant the most to the pair. “It was almost like a backyard wedding,” Sarah adds, “Not a typical backyard wedding, but it felt like being in our neighborhood.” 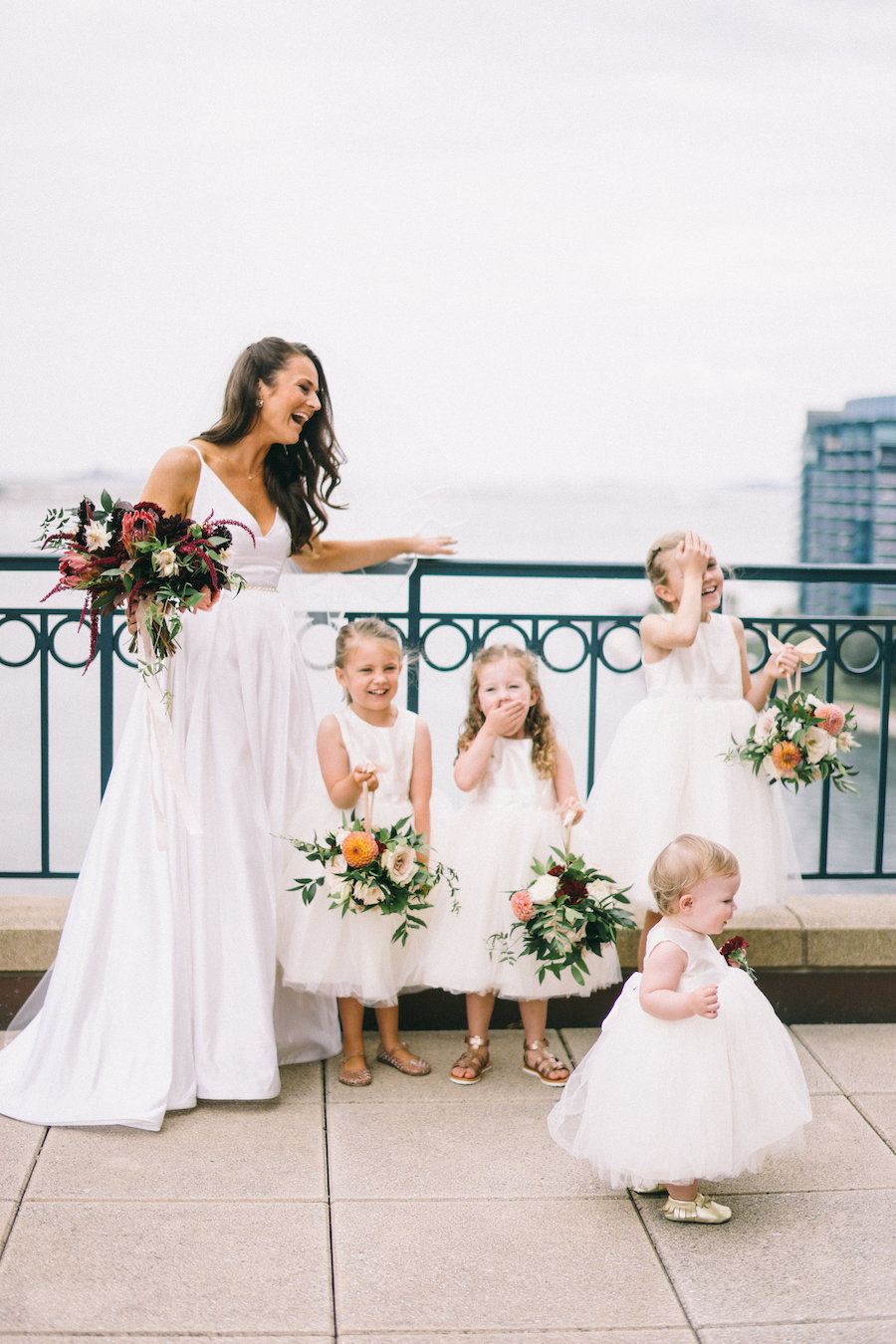 The bride found her Sarah Seven frock at Ceremony, where she spotted it immediately upon walking in. “I knew [after] first seeing it that it was the dress,” she says. “I wanted something simple that I could dance in.” Sarah’s flower girls, all of whom are her nieces, also wore white dresses and carried pomander balls that matched the bride’s own bouquet. 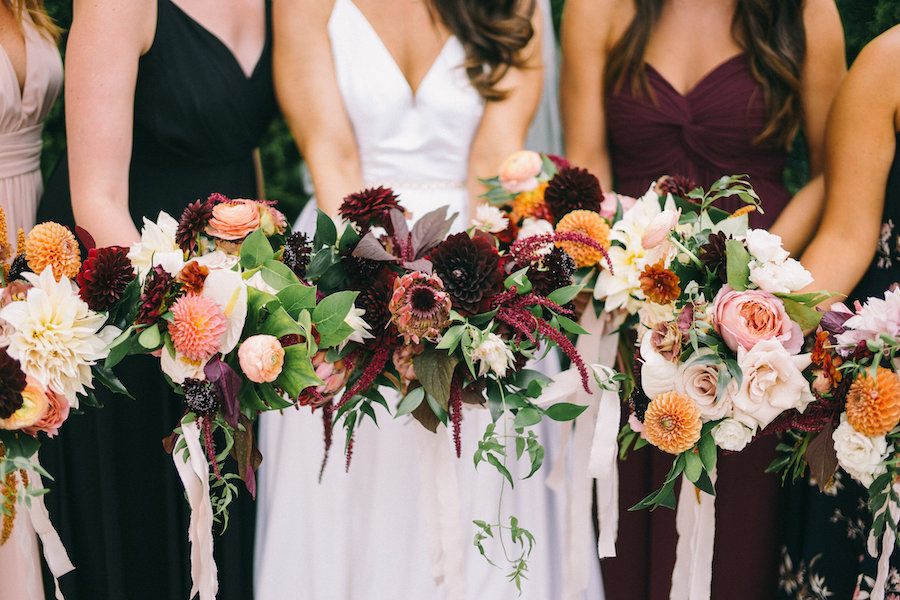 “When I first saw it I gasped,” Sarah says of her bouquet. “I asked everyone, ‘Are we sure this is mine?’ because I was just on the floor.” Floral designer Shawna Havenga of the Wild Dahlia created a moody palette for the arrangement with garden roses, dahlias, protea, ranunculus, cosmos, and other blooms. 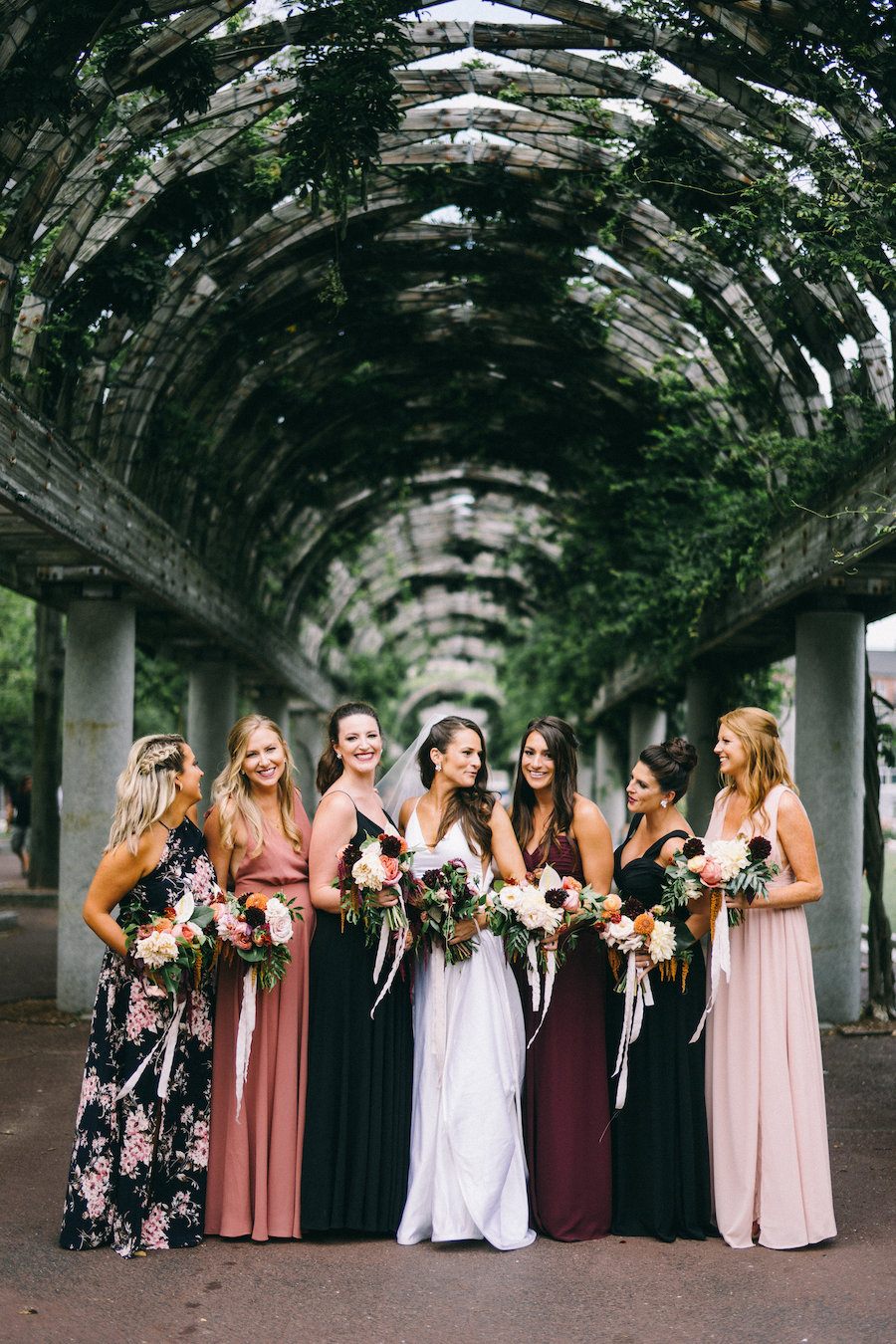 Sarah asked her bridesmaids to don either black, pink, or burgundy for her wedding day, but let each of her friends choose their own gowns. 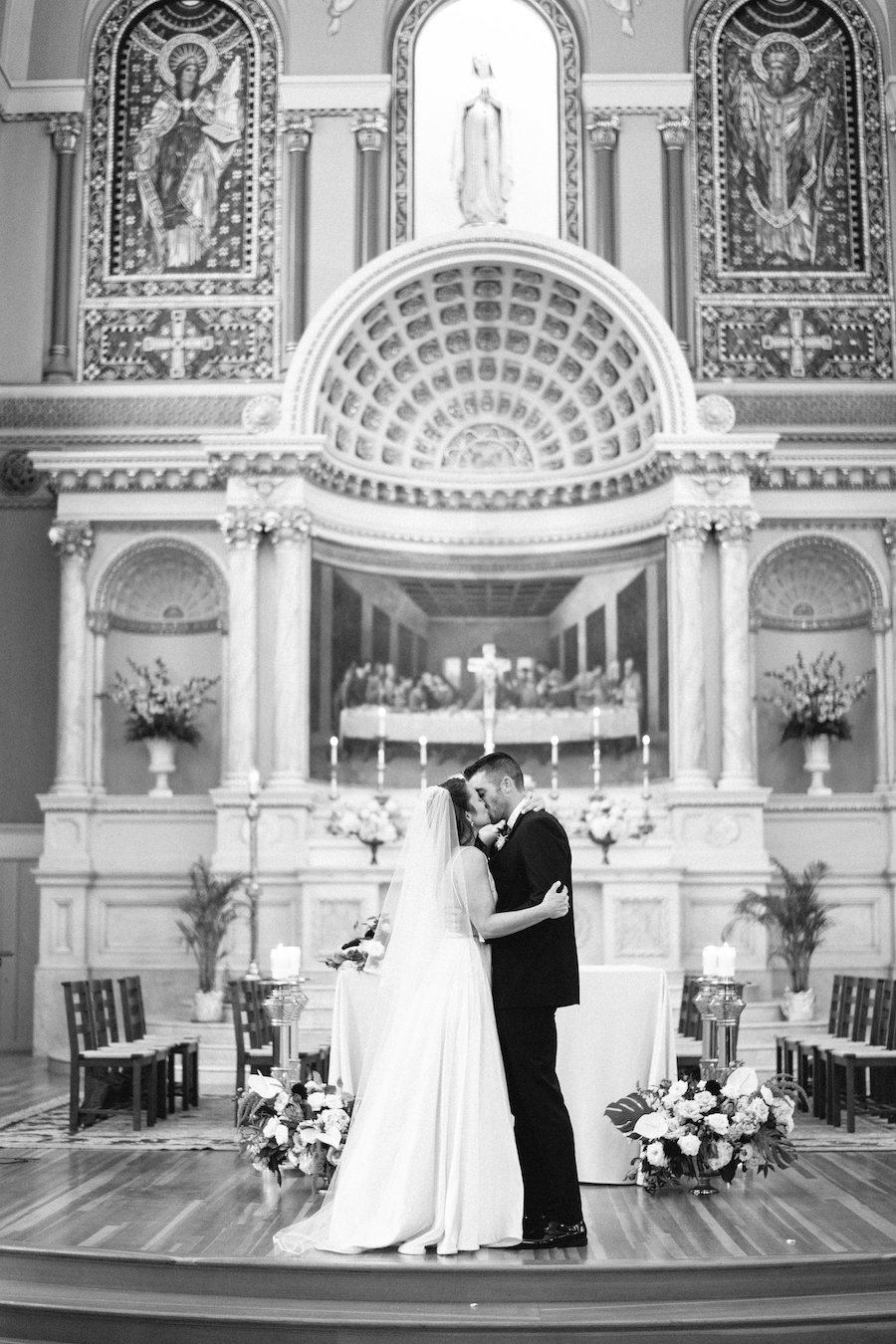 The bride and groom held their ceremony at Saint Cecilia Parish, located just a few blocks from their apartment in the Back Bay. It is also where Sarah’s father was baptized and Christopher’s sister got married in 2012. 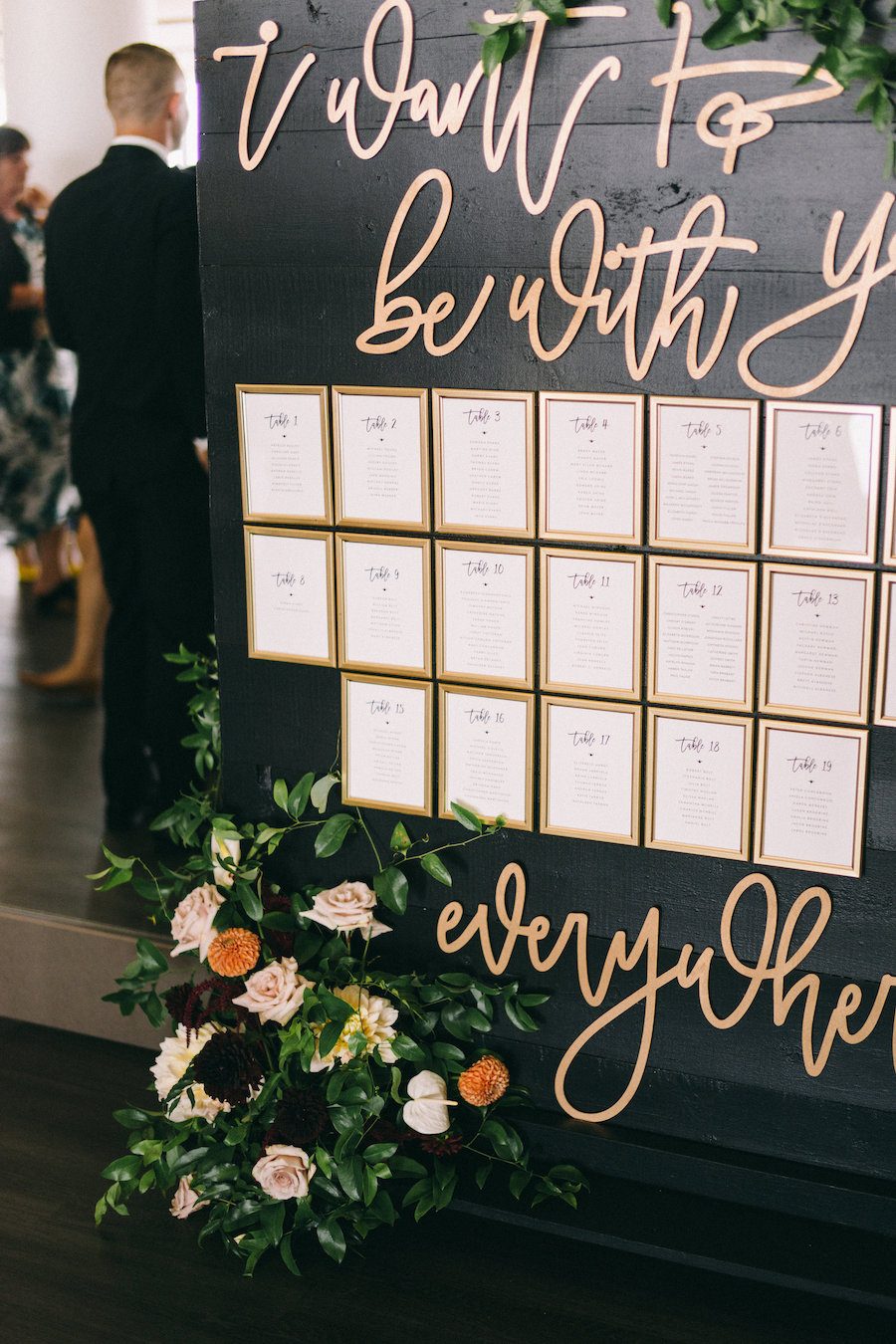 Sarah and Christopher had hoped to play Fleetwood Mac’s “Everywhere” during their ceremony, but ultimately weren’t able to due to church regulations. Instead, the couple chose to include a lyric from the song on their black-painted shiplap seating chart, designed by Fête Collection. 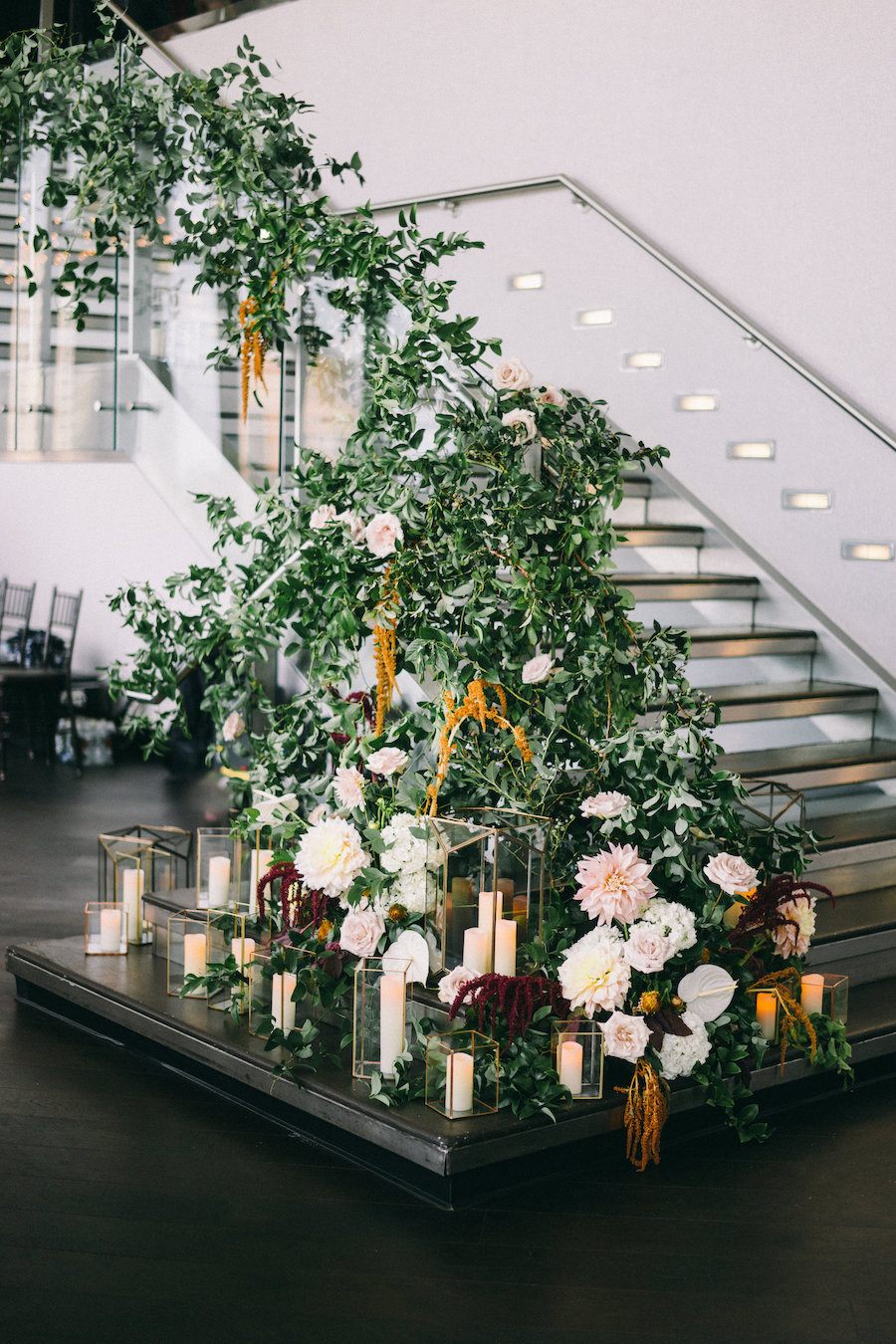 A floral installation lined the staircase that connects the venue’s mezzanine, where the couple hosted cocktail hour, to its main reception space. “I couldn’t believe how stunning it was,” the bride says. 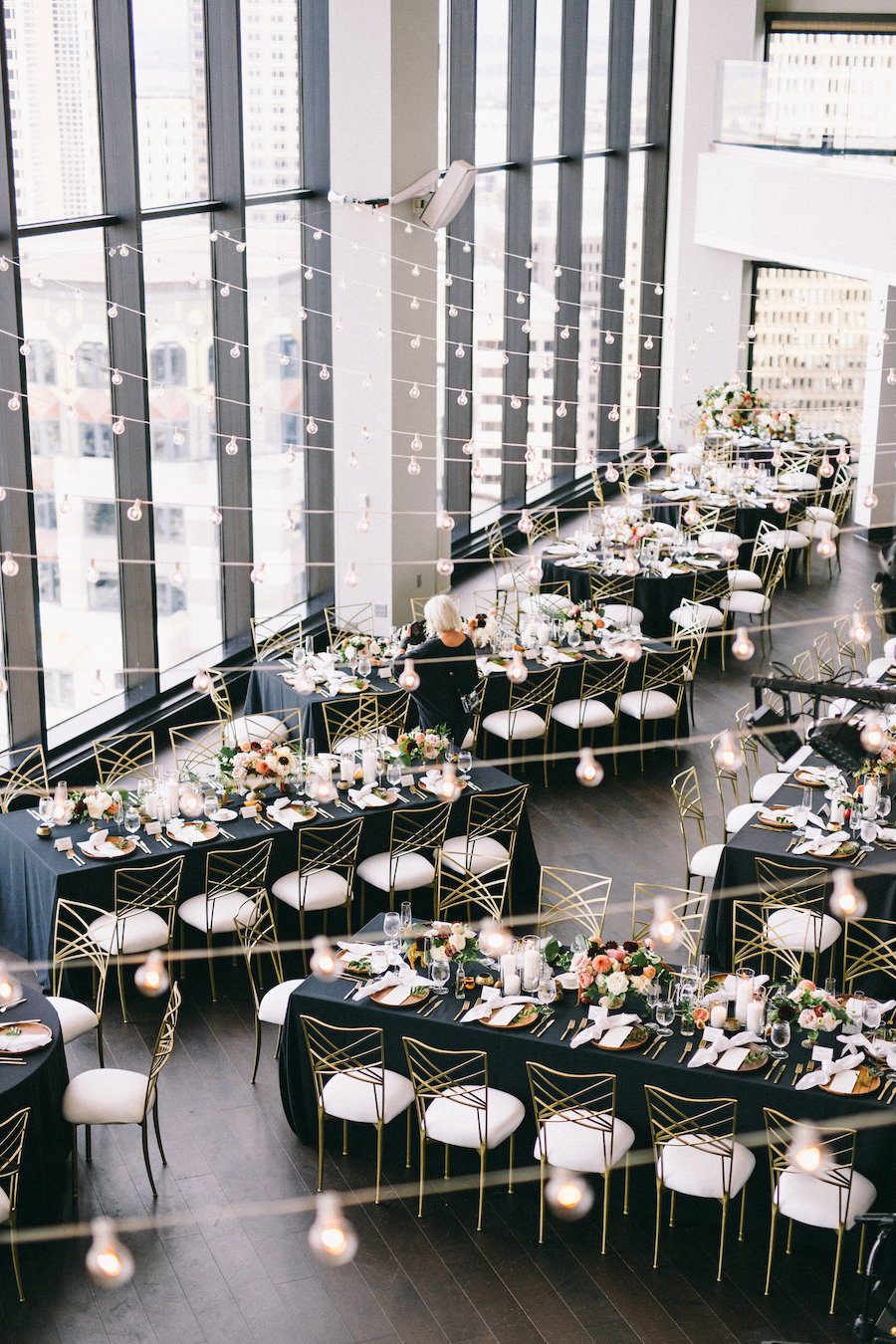 Drawing inspiration from the patio at Evangeline, a restaurant Sarah and Christopher passed during a Napa Valley bike tour, the couple hung bistro lights across their reception space. They also dressed up their tables with black linens and gold “Chameleon” chairs.” 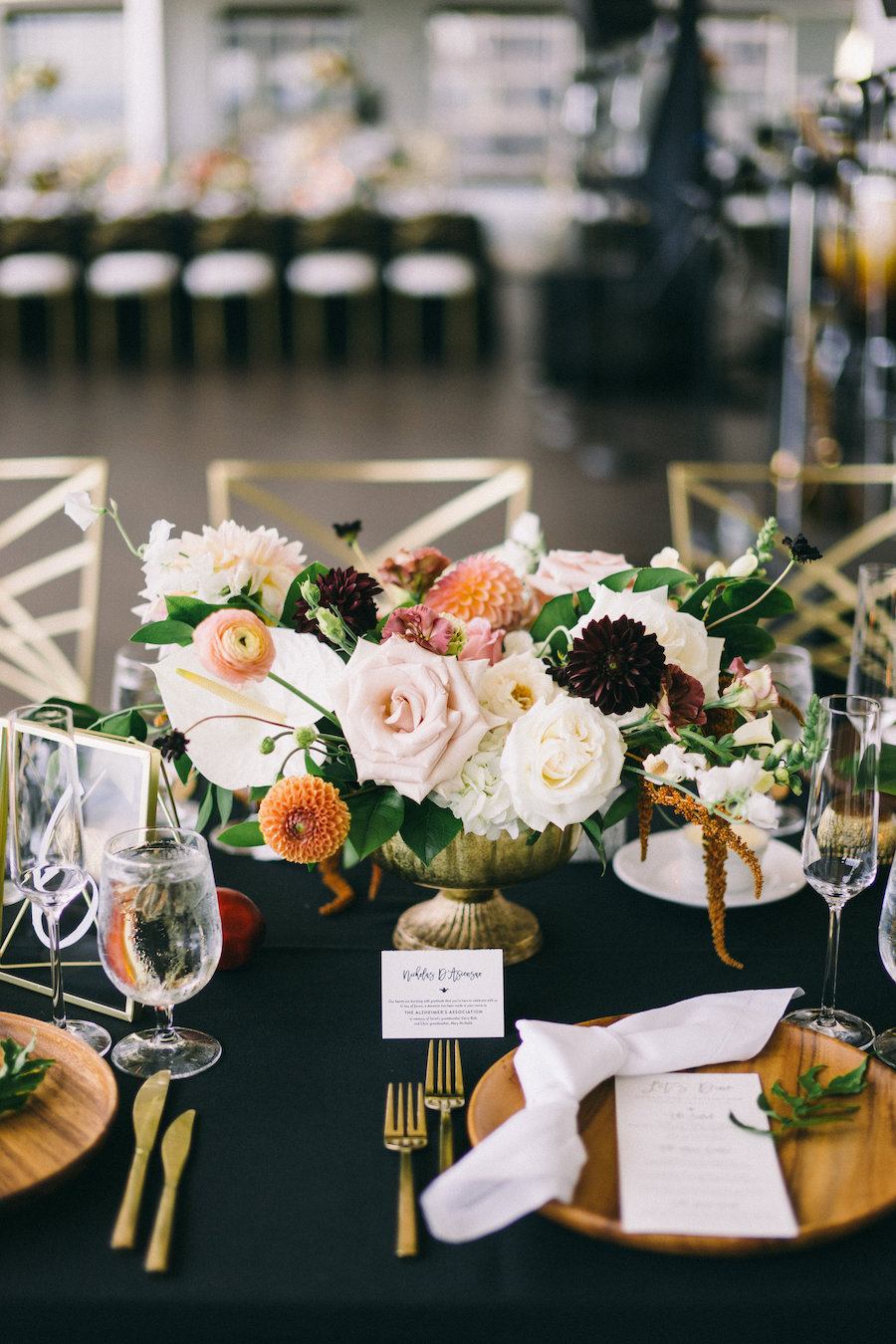 The two adorned their tables with olive-wood chargers, gold flatware, and arrangements of garden roses, protea, dahlias, and palms, surrounded by fruits such as grapefruits, plums, and peaches for an added pop of color. 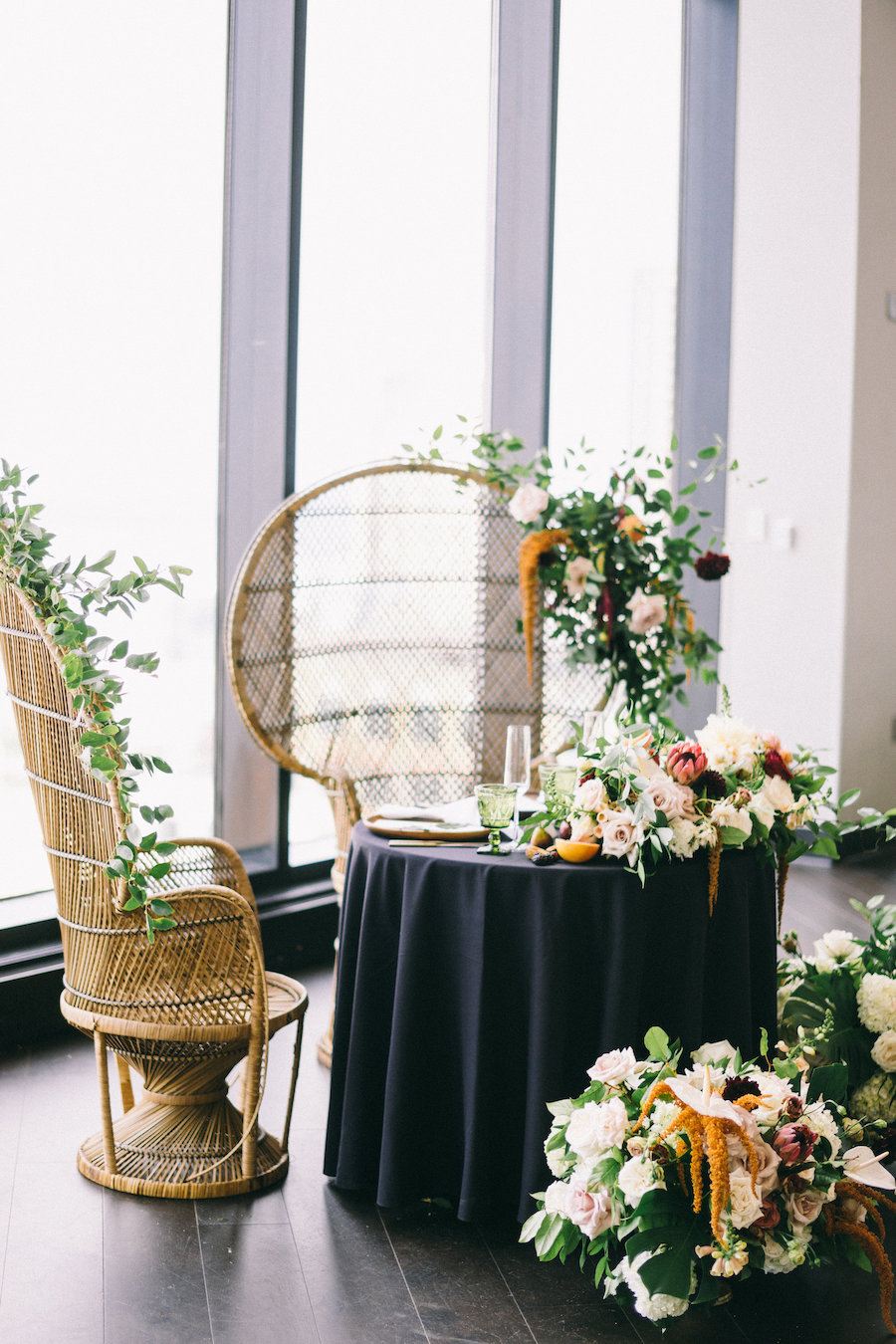 The sweetheart table, furnished with two peacock chairs, was “really important to us,” Sarah says. “We wanted to have moments that we could spend together.” 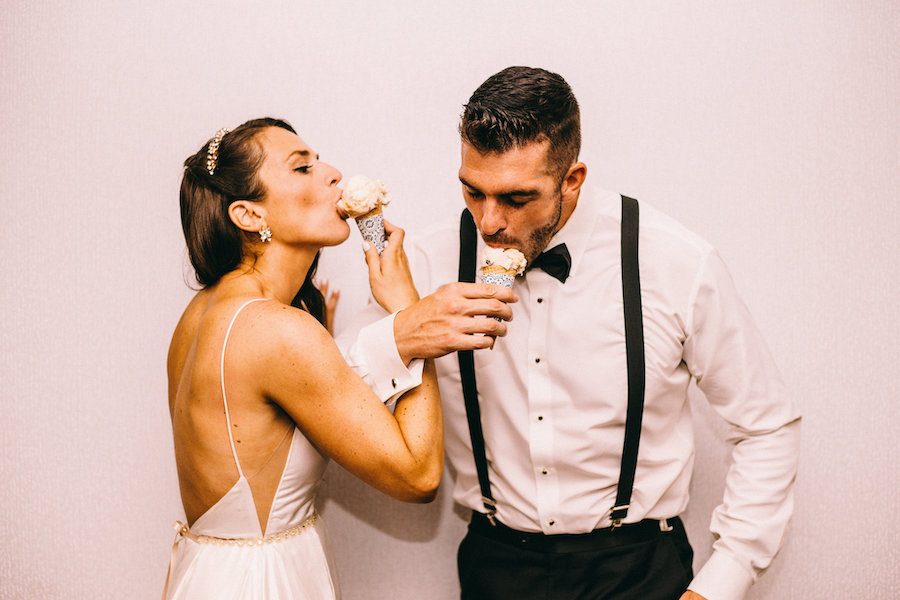 In lieu of cake, the couple provided a bar serving Ben & Jerry’s ice cream—a treat they often enjoy together on their couch. “It was a hot August night with a lot of dancing, so the opportunity to dig into the ice cream hit the spot,” Sarah says. Each cone was wrapped in a custom-patterned paper, dreamed up by Fête Collection.