Where to Take a Barre Class in Boston Right Now

Take a barre class on a trampoline at Barre Groove or stick to a more traditional experience at Pure Barre—the options are truly endless when it comes to barre studios in Boston. 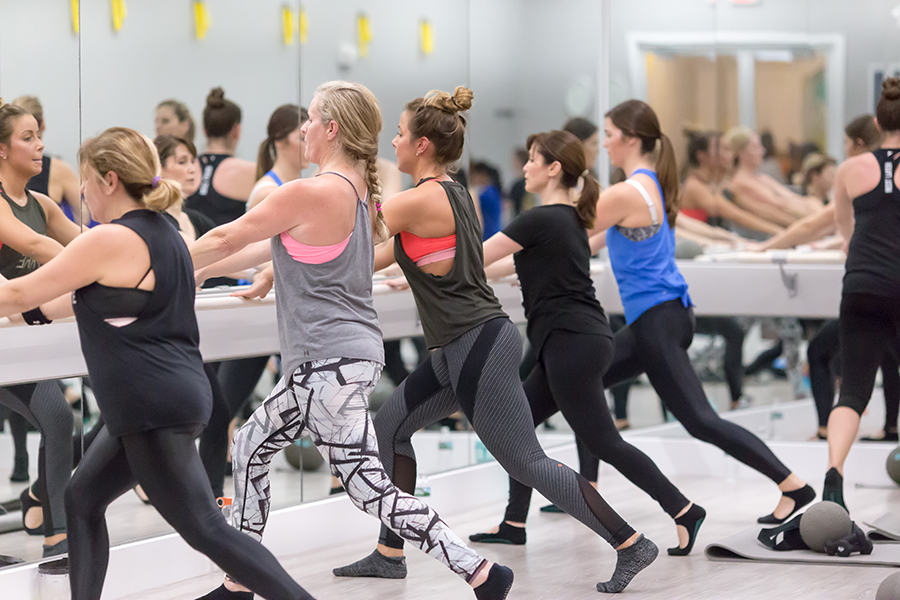 Whether you’re looking to take a barre class on a trampoline, or while listening to fast-paced music, or if you just want to drop in for a more traditional class—it’s no secret the barre craze is real, and that people have strong opinions about it. With the number of studios that have cropped up in Boston, it can be a bit overwhelming trying to find the one that’s right for you. We’ve rounded up 10 studios where you can take a barre class right now so all you’ve got to do is slide on those grippy socks and hit the barre.

This franchise is one of the most established barre studios out there, with over 500 locations operating across North America. The Pure Barre program includes a collection of 45-50 minute workouts that use a series of isometric movements to strengthen the whole body. For newcomers, the Pure Foundations course teaches the basics of barre in a small group setting that’s perfect for testing your abilities in a more comfortable, easygoing environment.

Founded by Burr Leonard in 2001, the Bar Method is dedicated to providing a barre workout that is a fit for anyone, regardless of ability. Building on the techniques of the Lotte Berk Method of fitness training, Leonard created the Bar Method under the guidance of physical therapists so that every workout is safe and effective for all students. Each studio offers the signature Bar Method class along with the Bar Advanced class and the more cardio-focused Bar Move. The Bar Express course also provides a slightly shorter workout for on-the-go clients.

Bad to the Barre

Bad to the Barre is a relative newcomer to the local barre scene that emphasizes working with students of all ages, backgrounds, and body types. The workout begins with a warm-up period of upper-body exercises followed by a seat series that uses the ballet barre to strengthen the core. Bad to the Barre holds barre class on Saturday mornings at 9 a.m. and Monday evenings at 7:30 p.m.

Barre & Soul, a best of Boston winner, is a yoga and barre studio founded by Andrea Isabelle Lucas that takes a more scientific approach to traditional barre. Lucas’s method builds on Lotte Berk’s principles to isolate a particular muscle group and train it with a series of “micro-movements.” This program results in faster muscle recovery and an increase in muscle-building hormones. New Barre & Soul students receive a discounted rate of $79 for 30 days of unlimited classes.

Xtend Barre is an international barre franchise, taught in studios across five different countries, that incorporates elements of Pilates and dance into a traditional barre workout. Unlike the small, focused movements of other barre methods, Xtend Barre uses full-body movements to develop strength, endurance, and flexibility in its barre class. New clients get a month of unlimited classes for $99.

Local studio Barre N9ne focuses on working the muscles through a combination of traditional isometric exercises and Pilates-inspired stretches. Barre N9ne offers special courses and pricing for brides and new moms, as well as a new client special of three classes at the Somerville location for $30.

Simply Barre, in South Boston, was founded in 2014 by Erin Lehmann. The Simply Barre technique emphasizes mindful exercise and avoids repetitive movements to ensure that every student stays focused and gets the best results. Each hour-long class includes a brief warm-up followed by a series of targeted exercises meant to strengthen your upper body, legs, and core in quick succession. New students get five weeks of unlimited barre for $79.

Exhale Spa, with locations in the Back Bay and North End, does a little bit of everything when it comes to fitness. They offer a variety of barre, cardio, and yoga classes, as well as unique combinations of all three. The standard Exhale barre technique takes ballet-inspired exercises and mixes them with planks, light weights, and pushups to provide a dynamic full-body workout. Exhale’s Barre+Cardio and Barre+Yoga courses offer slightly more varied exercises, with the cardio session building endurance and the yoga course focusing on flexibility and mindfulness.

Since it first opened its doors in Portland, OR in 2008, Sadie Lincoln’s Barre3 studio has expanded to over 100 locations around the world, including two in the Boston area, in the South End and Brookline. The Barre3 fitness method, developed with a team of doctors and physical therapists, uses a series of strengthening postures and movements in a barre class intended to shape the body.

Downtown fitness studio Barre Groove offers a low-impact workout that combines music and dance with traditional barre exercises. Taught by Alanna Perry, a former New England Patriots cheerleader, the Total Groove class will have you bouncing up and down on a trampoline, flinging pom poms in the air, and performing more traditional barre sequences using the legs of the trampoline for support. The studio holds several classes a day every day except Sunday, with newcomer specials as low as $20 for two classes or $40 for five.