Forget Sitting in Traffic: It’s Time for Boston to Take a Hike

Boston’s traffic and transit woes are bad and only getting worse. But what if escaping them is as simple as putting one foot in front of the other? 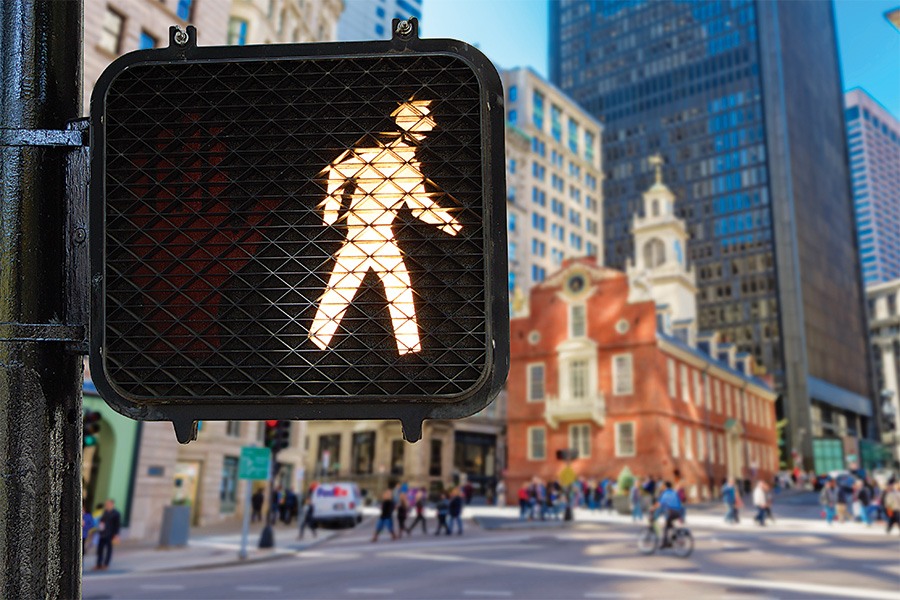 It sounds impossible, yet somehow the nightmare of getting around Boston seems to be getting worse. The T is often quite literally going off the rails, and when it’s not, repairs are slowing it down. Our traffic, credibly called the worst in the nation, is so bad that former city Transportation Commissioner John Vitagliano once described it as a “public safety hazard,” with fire trucks and ambulances falling prey to the gridlock. Meanwhile, Bostonians are taking more Uber and Lyft rides than ever—up 21 percent from 2017 to 2018—further clogging the city’s cow-path-wide streets. Worst of all, despite a raft of policy proposals, there’s no sure sign of relief in sight. But what if there were a simple solution, one that could inflate your ego, relieve the stress of mind-bending gridlock, and even help keep a few bucks in your wallet? That’s right: It’s time to walk.

Rush-Hour Race
Got somewhere to be at 5 p.m. on a Tuesday? Try hitting the bricks.

Here’s the thing: Boston isn’t that big. Our city has the second-smallest square footage of any major metropolis in the nation, at a sparse 48 square miles (compare that to Houston’s 665 square miles). Yes, it’s hard to get around—commuters waste an average of 164 hours a year trying to do so—but that’s largely the result of overtaxed roads and underthought transit. Walking, though, liberates you from both of those failings. Not only is it the simplest, most reliable way to get somewhere, but between the time you’d kill waiting for an Uber driver to pick you up and the time you’d spend inching through traffic, it may even be faster.

Efficiency is only part of the equation, though—there’s also quality of life. New York’s walking culture, for instance, is one of the reasons the city feels so vibrant. Pounding the pavement puts you in touch with your city in ways that driving just can’t. Besides, it’s healthier. After all, says Caroline Apovian, a diabetes and obesity researcher affiliated with Boston University’s School of Medicine, the list of health benefits from walking includes everything from higher brain function to better sleep to flat out living longer. “We were made to walk,” she affirms. And while Apovian says 30 minutes is the ideal minimum time to exercise each day, “it can be in five- or 10-minute increments.” Which is to say, in roughly the same amount of time it might take to walk to your next appointment instead of hopping in an Uber.