And their reception tent will stop you in your tracks. 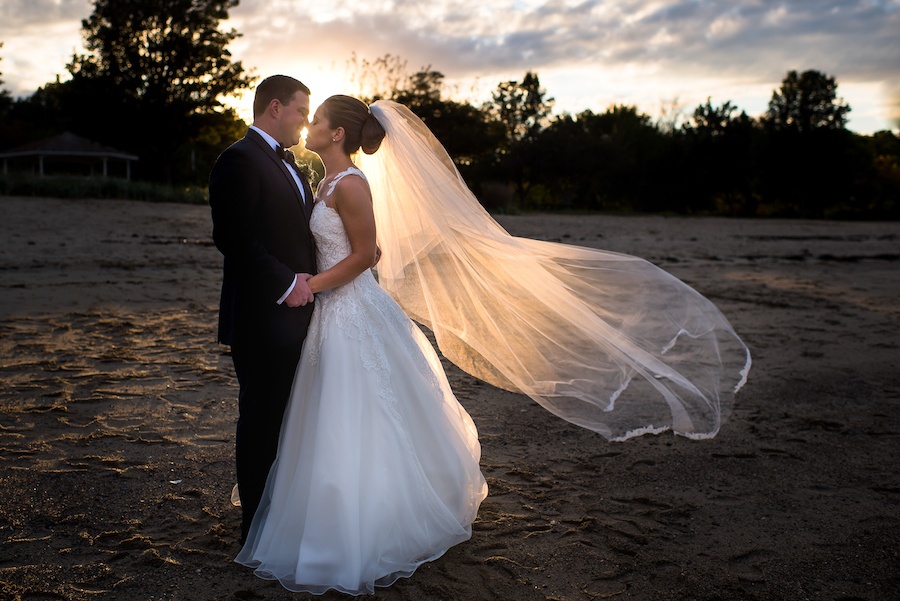 Like many college romances, Katy Monaghan and Tom Berlenbach’s began when they met at a bar in Washington D.C., where they were finishing their junior year at the same university. “He was attractive and kind and that was what I was looking for,” Katy says. “I’m pretty sure he felt the same about me.” They talked throughout the evening, but then fell out of touch during summer break. When they returned to school in the fall, though, they were set up by mutual friends and went out for dinner at a restaurant in Georgetown. After their meal, Tom asked if Katy wanted to go get Häagen-Dazs. “[That] sealed the deal,” Katy says. “As a teenager I always thought my perfect first date would be going to Häagen-Dazs, and he did that.”

After six years of dating (three of them long-distance), the couple moved in together in Annapolis, Maryland. In spring 2017, Katy went down to Naples, Florida, where her parents own a condo, and Tom showed up to surprise her. They decided to take a walk along the shore to a happy hour at a nearby beach club, and Tom said he was going to get dressed up. This was “not like him on the beach,” Katy says. “I thought that was a little strange. I was like, ‘I guess I’ll straighten my hair.’ And my sister was like, ‘Maybe put on a little mascara.'” On their way back from the happy hour, they stopped in front of the condo on the beach. “I said, ‘Hey, we have the ocean here and we look halfway decent. Maybe we should take a selfie.'” Tom suggested they ask a nearby couple to take their picture instead. The woman took two photos, and then Tom asked her to take one more. “I immediately thought ‘That’s not like him,'” Katy recalls. Then Tom was down on one knee. “I was in shock, I didn’t say anything at first, and then he took my sandals out of my hand and threw them on the ground, and then I said, ‘Of course,'” Katy says with a laugh.

When the couple began planning their wedding, they focused on family and fun. For the date of their celebration, they chose September 29, which happened to be the 35th anniversary of both sets of their parents; for their venue, they chose Katy’s parent’s house in Hingham. “My sister and I grew up watching Father of the Bride,” Katy explains. “I thought it was so neat that the character, Annie, has her wedding in her backyard. That was something I always wanted.” The bride says that the couple “didn’t know if it could be done,” but with help from the couple’s wedding planner, Nicole Simeral & Co. and Sperry Tents, Katy got the backyard celebration she’d always envisioned, complete with classic but eye-catching décor and enchanting white-and-green florals. After an hours-long dance party, the couple headed back to their hotel in Quincy “on a high,” Katy says. “The party was still bumping. People were still having fun and there was music playing as we headed down Main Street. Tom and I couldn’t have been happier.” 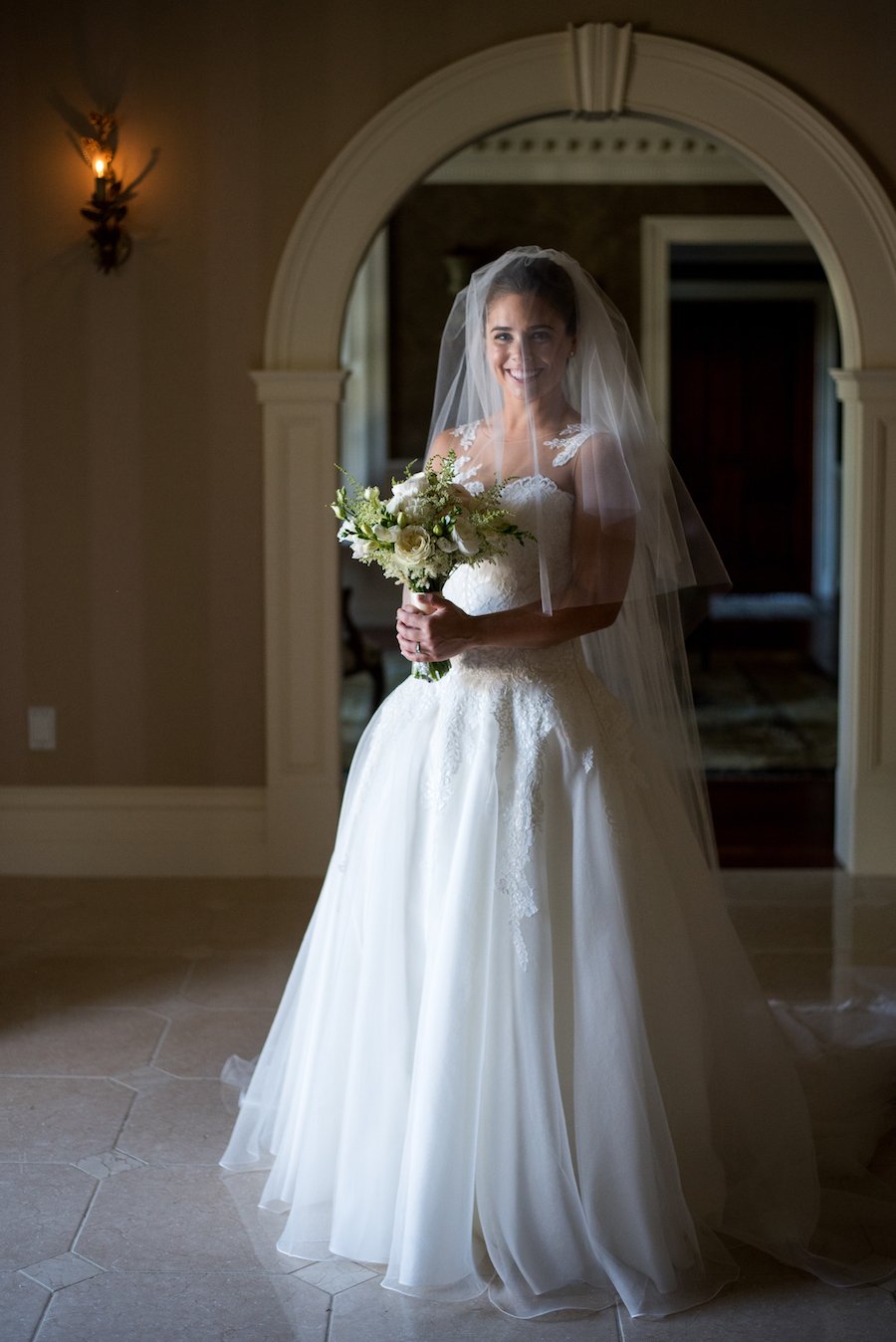 Katy tried on about 20 dresses at several salons before she found her match at La Reine Bridal in Waltham. “My sister, mom, and I were ready for lunch but my sister said, ‘Let’s just try this one on,'” Katy says of her Augusta Jones frock. “I tried it on and knew immediately it was the one.” 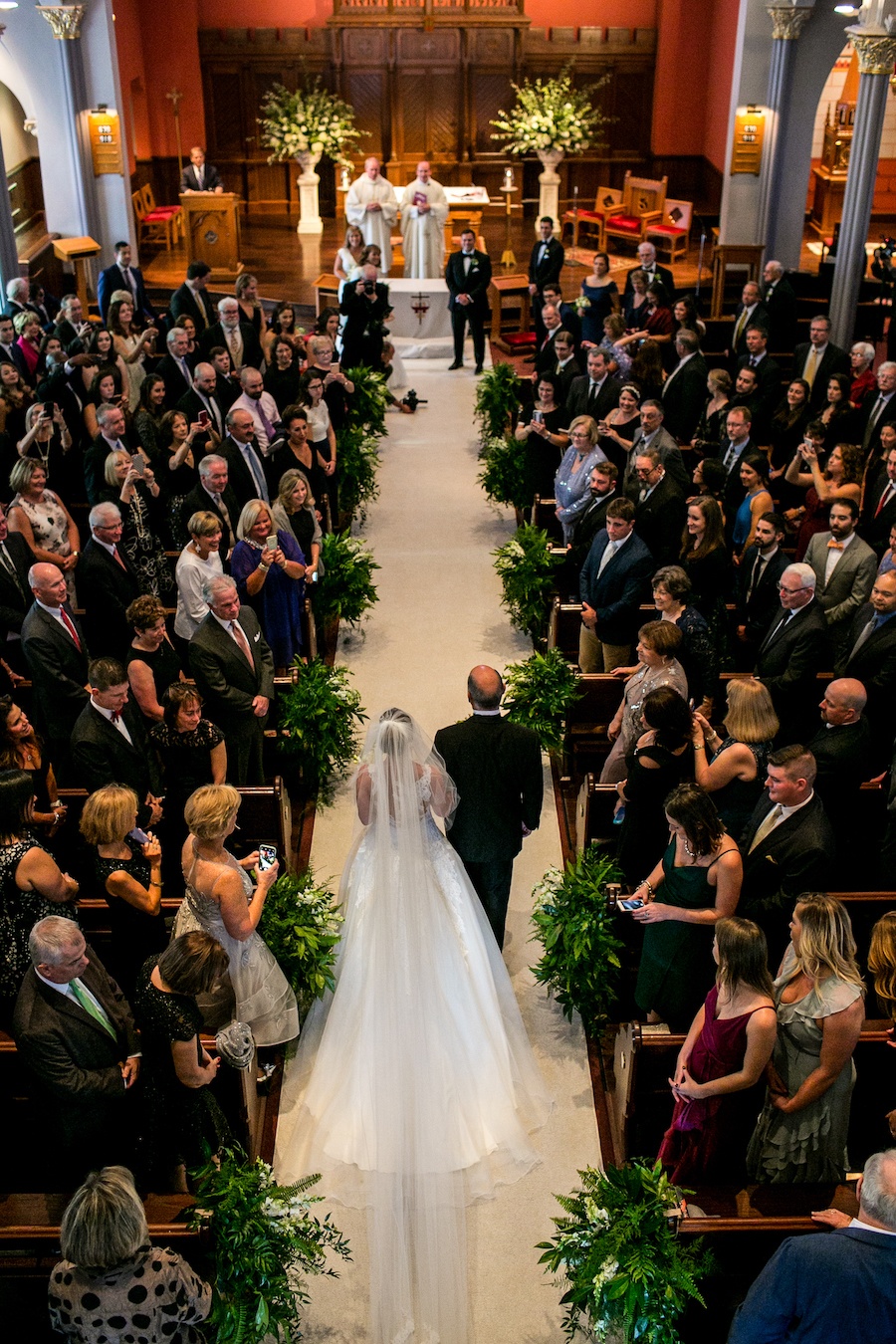 The couple’s wedding ceremony, officiated by a college friend who is now a priest, took place at St Paul’s Parish in Hingham. The church, located about a half mile from the bride’s parents’ home, is where Katy attended parochial school through eighth grade. “It was a very important part of our lives growing up, so it was important to me that that was part of our day,” she says. 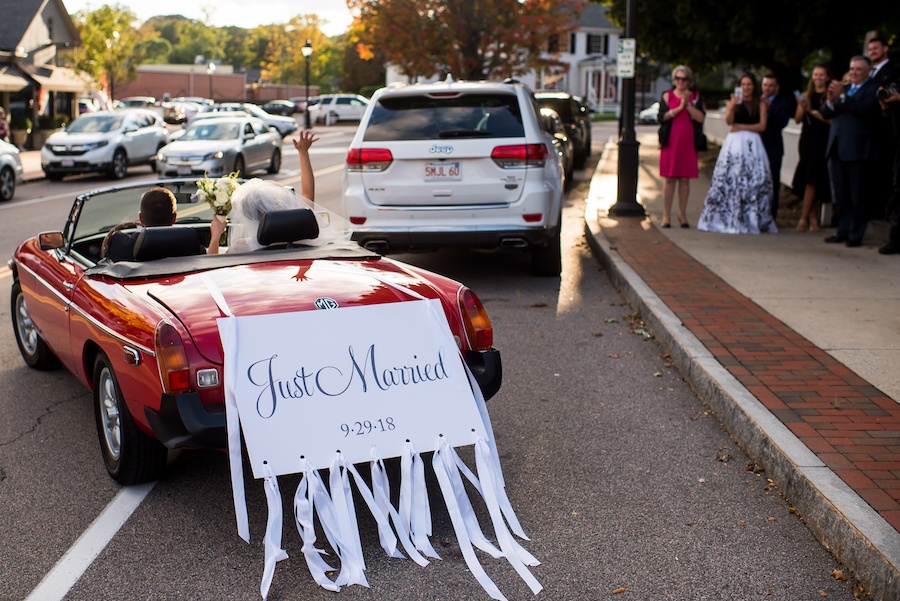 Katy had seen a couple drive away in a classic car after their wedding ceremony in a movie, and wanted to do the same. So the couple borrowed some wheels from a family friend, and then used this photo
as the inspiration for the custom stamps they placed on their thank you notes. 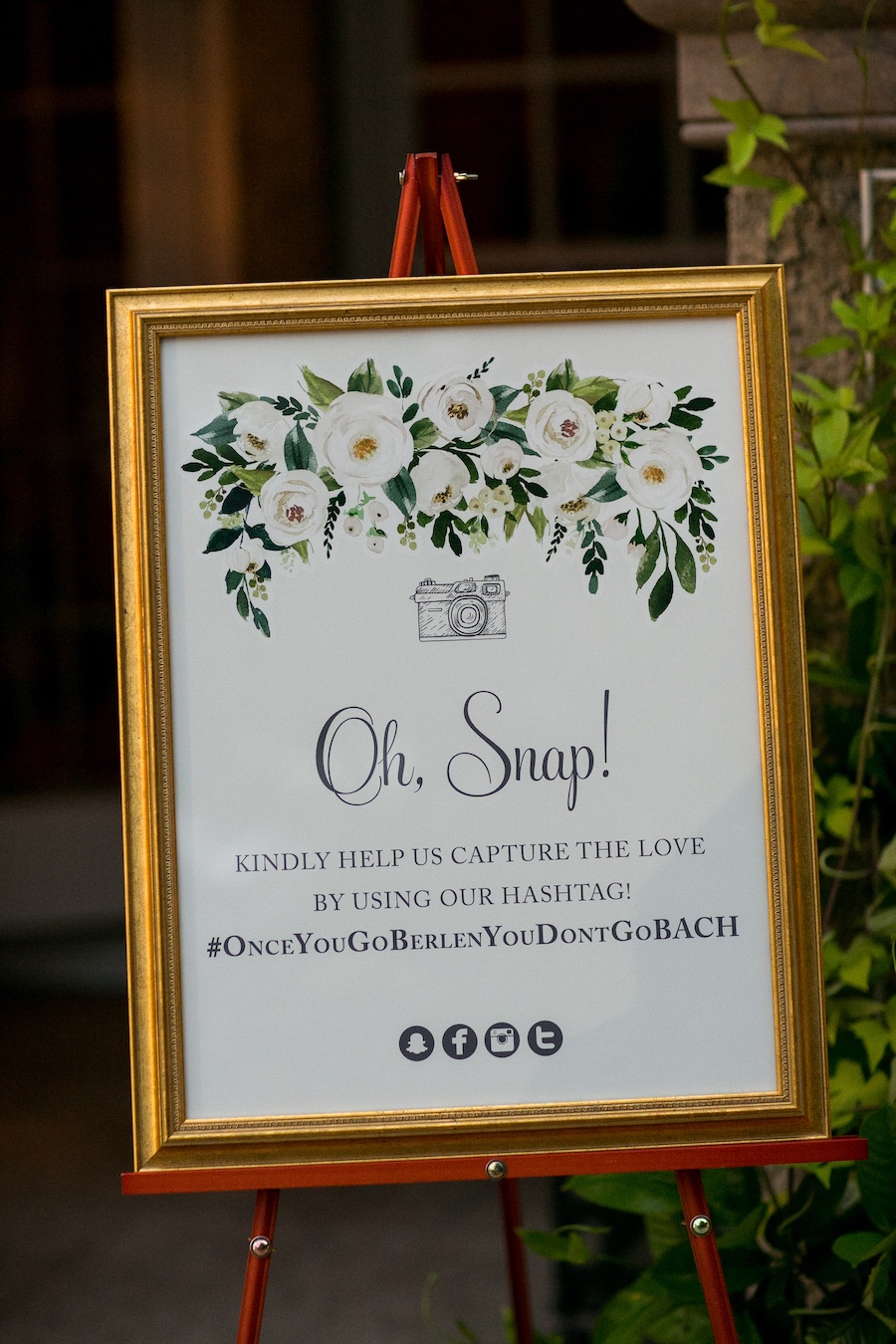 Katy’s sister Julie came up with the couple’s wedding hashtag. “We often joke about the ending of [Tom’s last name], so [the hashtag] seemed appropriate,” Katy says. “A little long, but we thought it was worth it.” 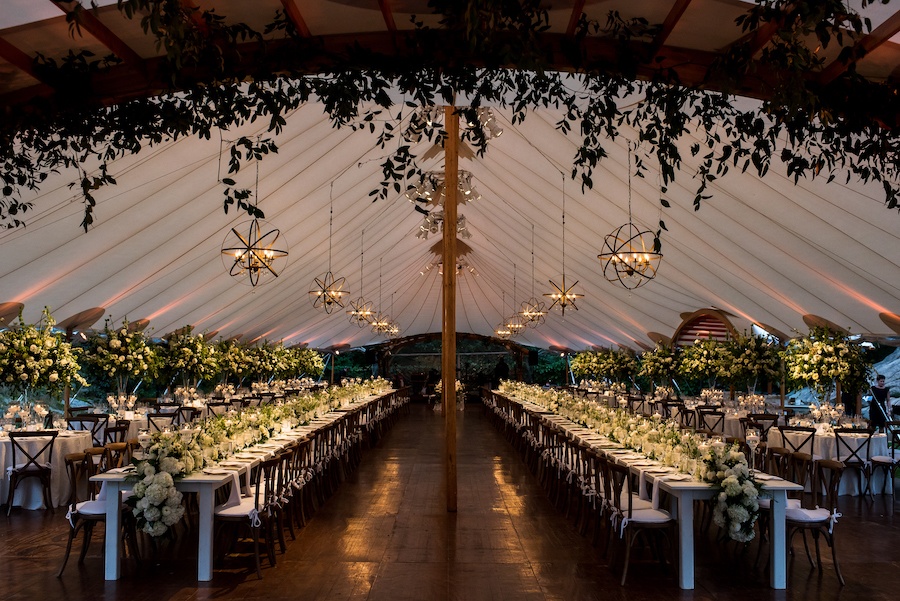 For their reception décor, the bride and groom sought details that would wow guests without being “too over-the-top,” Katy says. 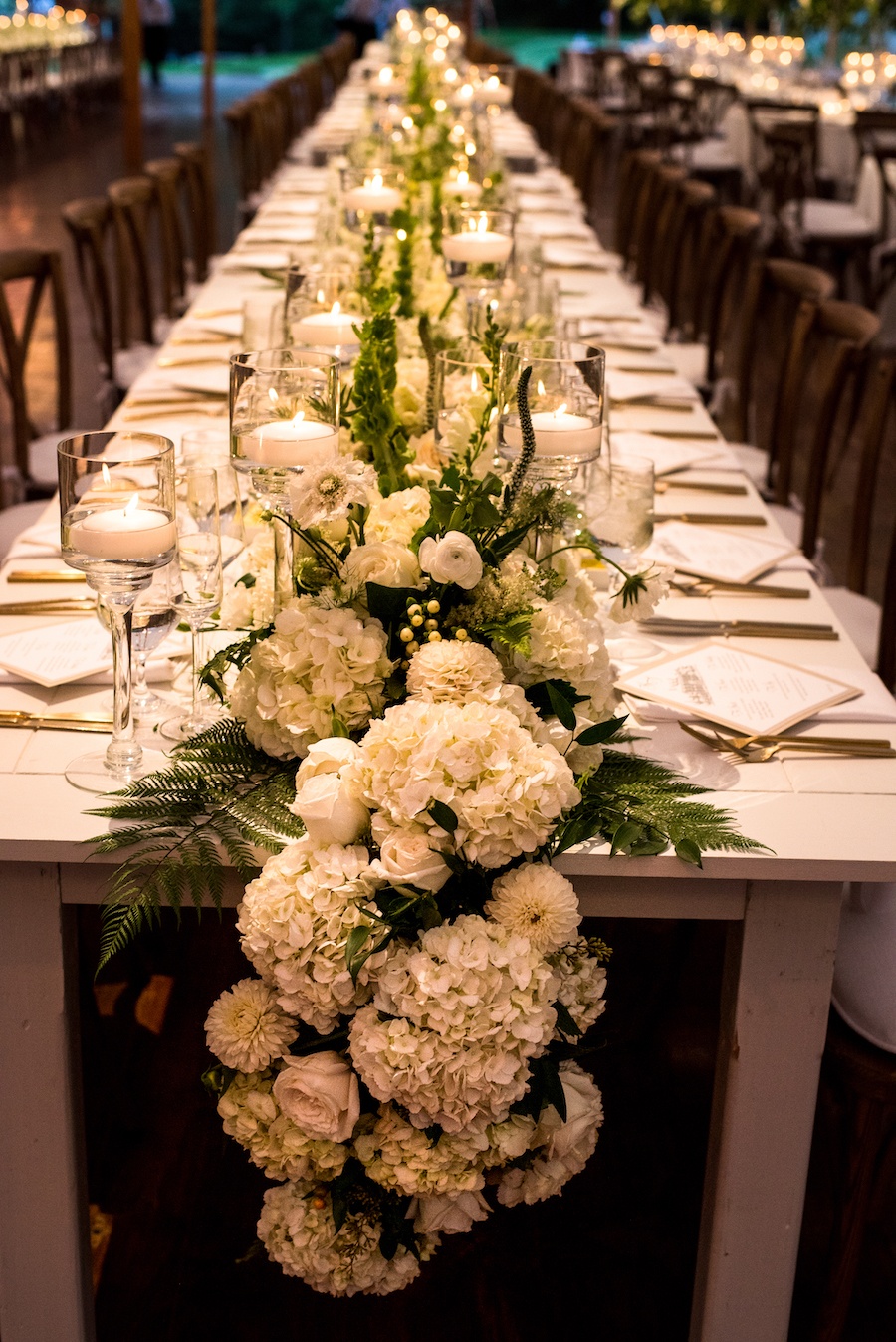 Each of the two long farm tables under the reception tent featured a garland of white buds and greenery surrounded by candles. “[The candles] added a warm romantic look,” the bride explains. 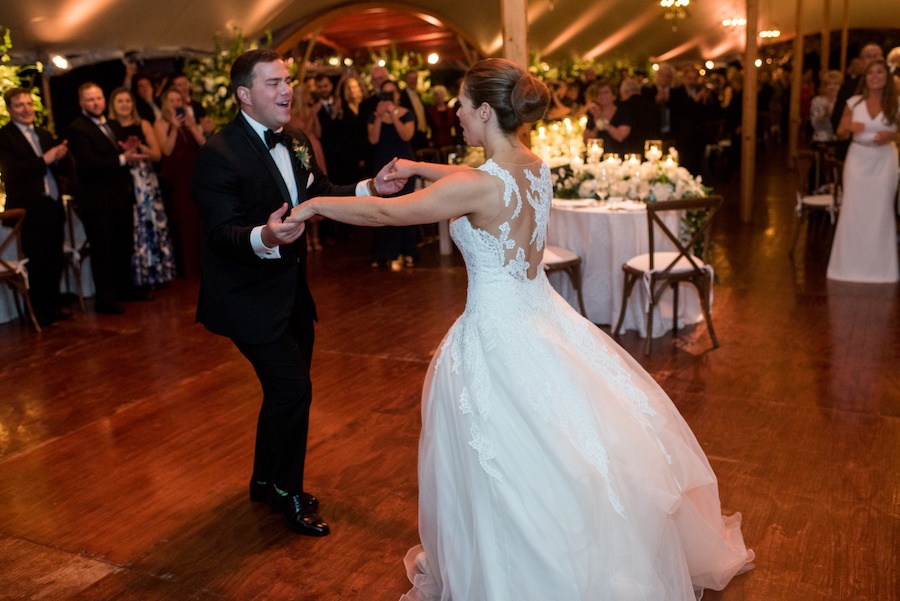 Katy and Tom had their first dance to “Yours” by Russell Dickerson.” “We’re both country music fans, and Tom often sends me songs on Spotify that are sometimes a little corny, but we’re okay with that,” the bride explains. “This was one of those, and I remember listening to the lyrics and immediately welling up because it described us pretty perfectly.” 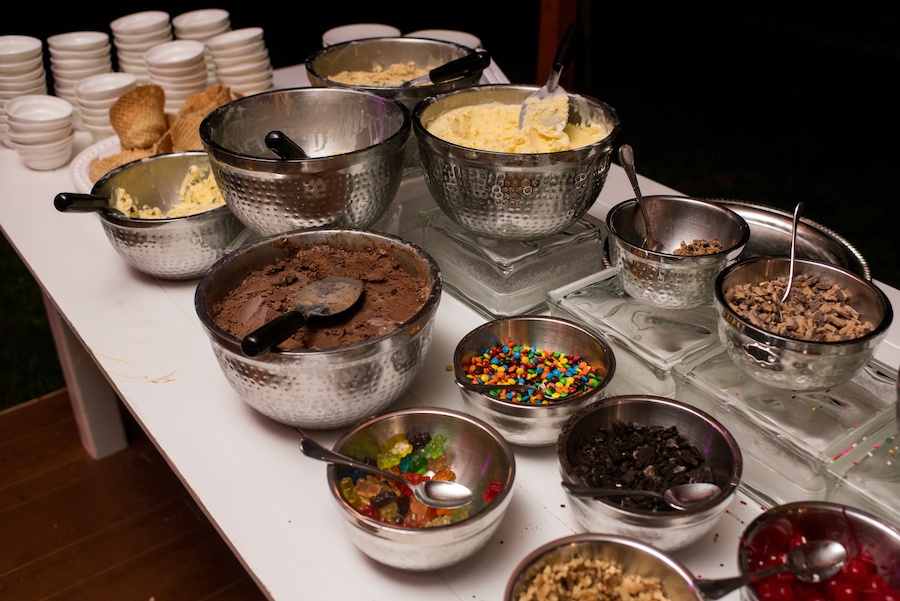 The ice cream lovers nixed cake in favor of a Häagen-Dazs sundae bar. “It seemed to make a lot of people happy,” the bride says. 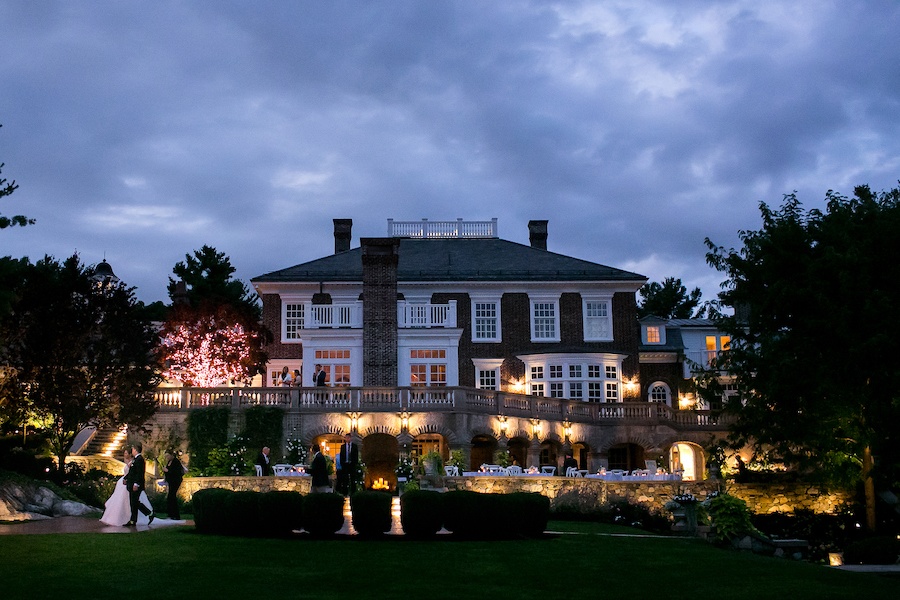 “This is, for any couple, a very special night, but [hosting it] where I grew up and [being] able to share that with Tom and his family made it even more special,” Katy says.