Oh, and served strawberry-frosted Dunkin' doughnuts at their reception. 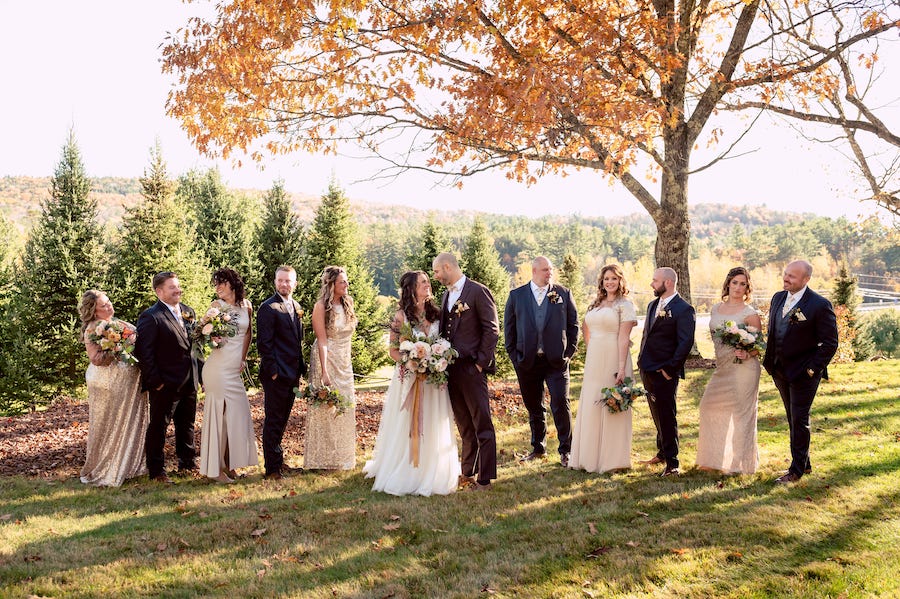 When Katelyn Chesley first saw Kyle Richardson on Bumble in September 2015, she instantly found him attractive, but it was the University of South Carolina t-shirt he was wearing in his profile picture that prompted her to send him a message. “It gave me a quick and easy way to shoot him a note that wasn’t too awkward,” says Katelyn, who also went to a college in South Carolina. As it turned out, attending nearby schools wasn’t the only thing they had in common: In addition to settling in Boston after graduation, they’d also both grown up in New Hampshire. When they met up a few days later at Beacon Hill Tavern for their first date, they had no shortage of material to chat about. “We found out we had mutual friends from way back when, and knew some of the same restaurants [in New Hampshire] and places to hang out,” Kately says. “I had never met anyone who made me feel so instantly comfortable.”

While Katelyn says knew that Kyle would be her future husband within the first three dates, she admits that it “took him a little longer to warm up,” adding “I had no doubt in my mind, but he was more reserved and hesitant in the beginning.” About a year later though, it was Kyle who was pushing for the next step in their relationship: moving in together. They took the plunge, renting an apartment together in Revere in 2016. And a year after that, the two returned to Beacon Hill Tavern for dinner to celebrate their second anniversary. That night, however, Katelyn felt that something was off. “I gave him a present at dinner and a card, and he gave me nothing in return,” she says. Then, when she asked if he wanted to split the bill, he said yes. “I was thinking, “‘Okay, you’re not going to give me anything and you want to split the bill?’ So I was a bit irritated on the way home and got myself so worked up,” she adds. When they stepped inside their apartment after the date though, Katelyn instantly spotted a bottle of champagne on the table, as well as two champagne glasses, roses, and an envelope. When Katelyn opened it, she discovered a card with the words “future wife” displayed on the cover. Katelyn was “perplexed,” she says, until Kyle told her to close her eyes; when she opened them, he was down on one knee. “I didn’t say anything for a while, I just stood there like a deer in headlights,” Katelyn recalls. “But then I said, ‘Yes,’ of course.'”

Given their shared roots in New Hampshire, the bride and groom knew right away that they’d tie the knot in the Granite State. When they visited the White Mountains to tour venues, they were instantly enamored with Bishop Farm in Lisbon, a rustic-chic event space complete with a restored 1876 barn. The couple, who love fall, set an October wedding date and took inspiration for their décor from the area foliage with a palette of gold, champagne, and pops of pale pink. “I wanted muted colors that complemented the season but weren’t too bold,” Katelyn says. Fast forward several months, and the day of their wedding was all that they’d imagined—and more. “It really was the best day of our lives, and we both reflect back on it like, ‘Wow that was just incredible,'” the bride says. “It’s hard to fully feel the emotions of your wedding until the dust settles though, because there’s so much going on.” So the day after they said “I do,” the two returned to the altar to truly soak it all in. “It was a powerful moment for us to go back there holding hands,” Katelyn says. “We knew the weekend was going to be amazing, but we never imagined it was going to be that amazing.” 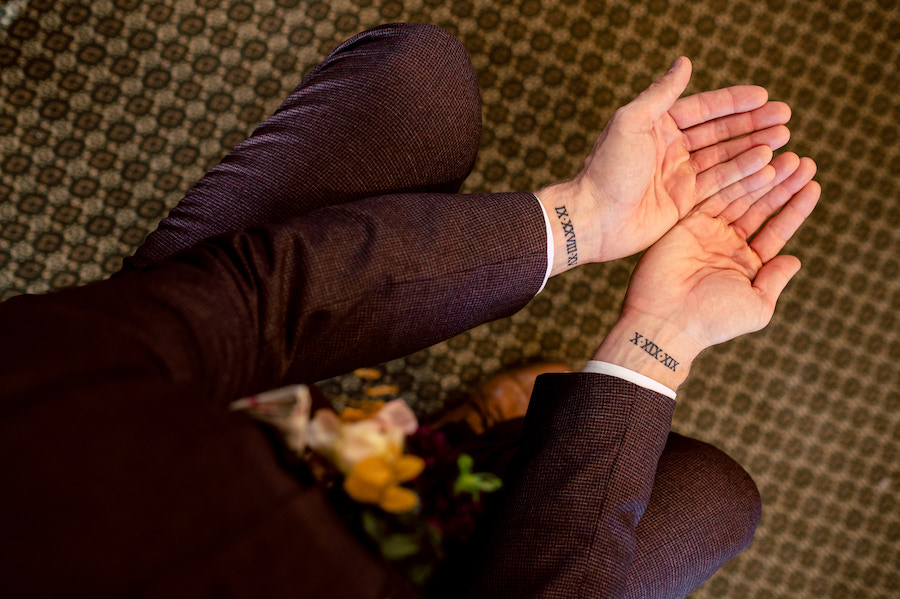 As a gift, Kyle surprised Katelyn on the big day with two new Roman-numeral tattoos—one representing their first date, and the other showcasing the couple’s wedding date—on his wrists. 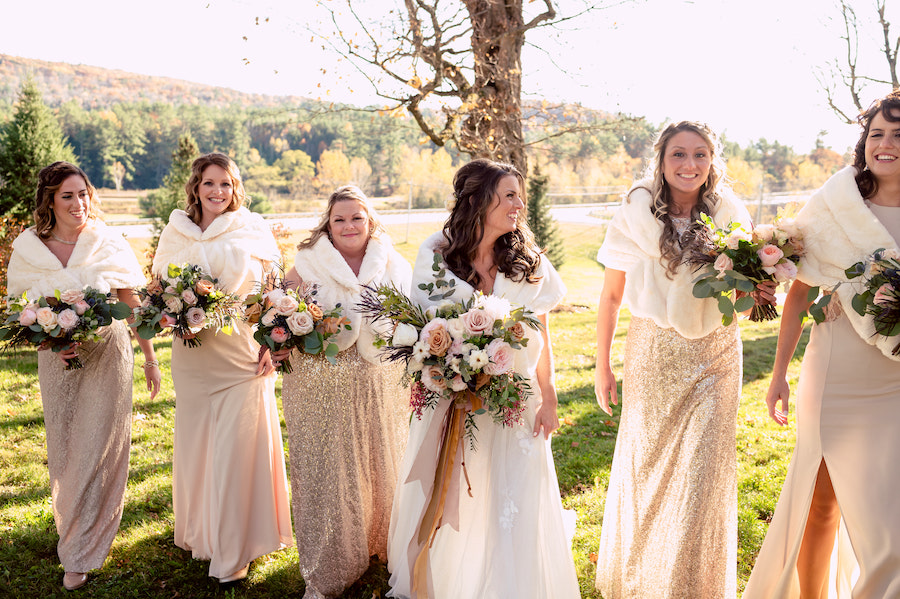 Katelyn’s bouquet featured dahlias, garden roses, and anemone, among other blooms. “I wanted something big [with] natural tones—a real dramatic and sweeping focal point,” the bride says. For her “something borrowed,” Katelyn also tied her late grandmother’s watch, acquired from a cousin, to the ribbon wrapped around the stems. 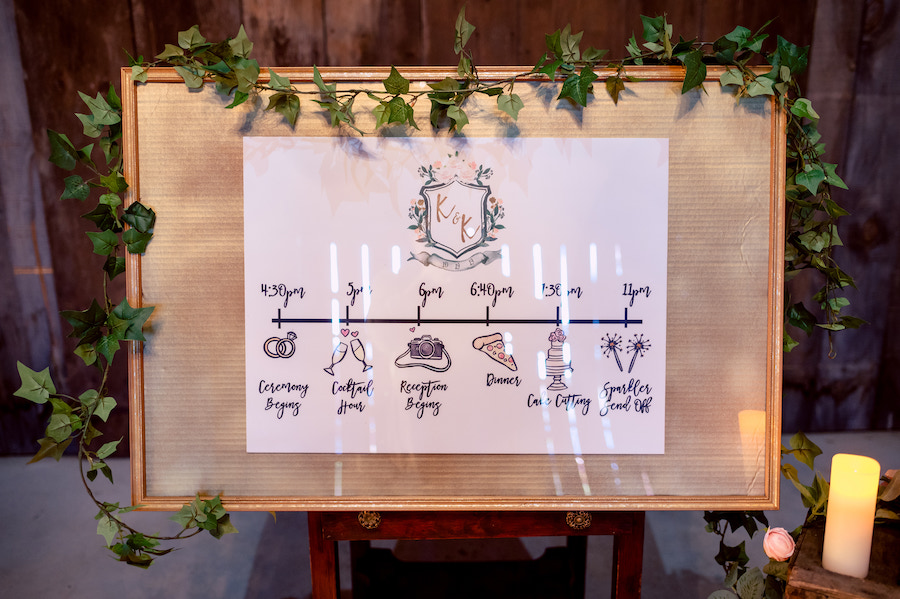 The couple displayed a hand-drawn timeline of the day’s events, created by Etsy seller Lupineda Custom Art. “I wanted to keep our wedding classy and elegant but, at the same time, we’re also just fun people who like to hit the dance floor, so I tried to convey that in some of the signage,” Katelyn says. 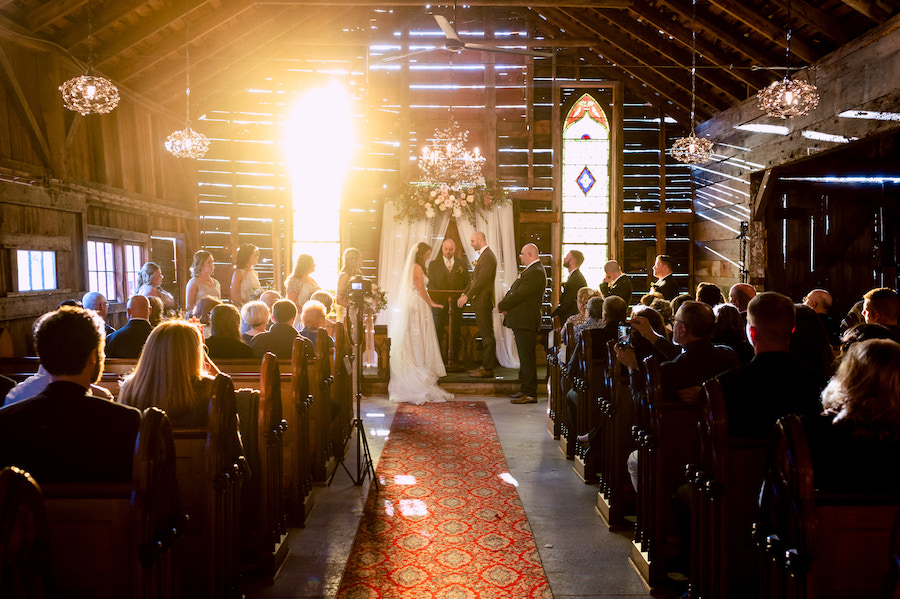 During the couple’s ceremony, which Katelyn’s brother Cameron officiated, light poured into the barn through stained-glass windows on either side of the altar. “Everyone kept talking about the lighting,” the bride recalls. “The way the sun was shining through created this natural spotlight that was so cool.” 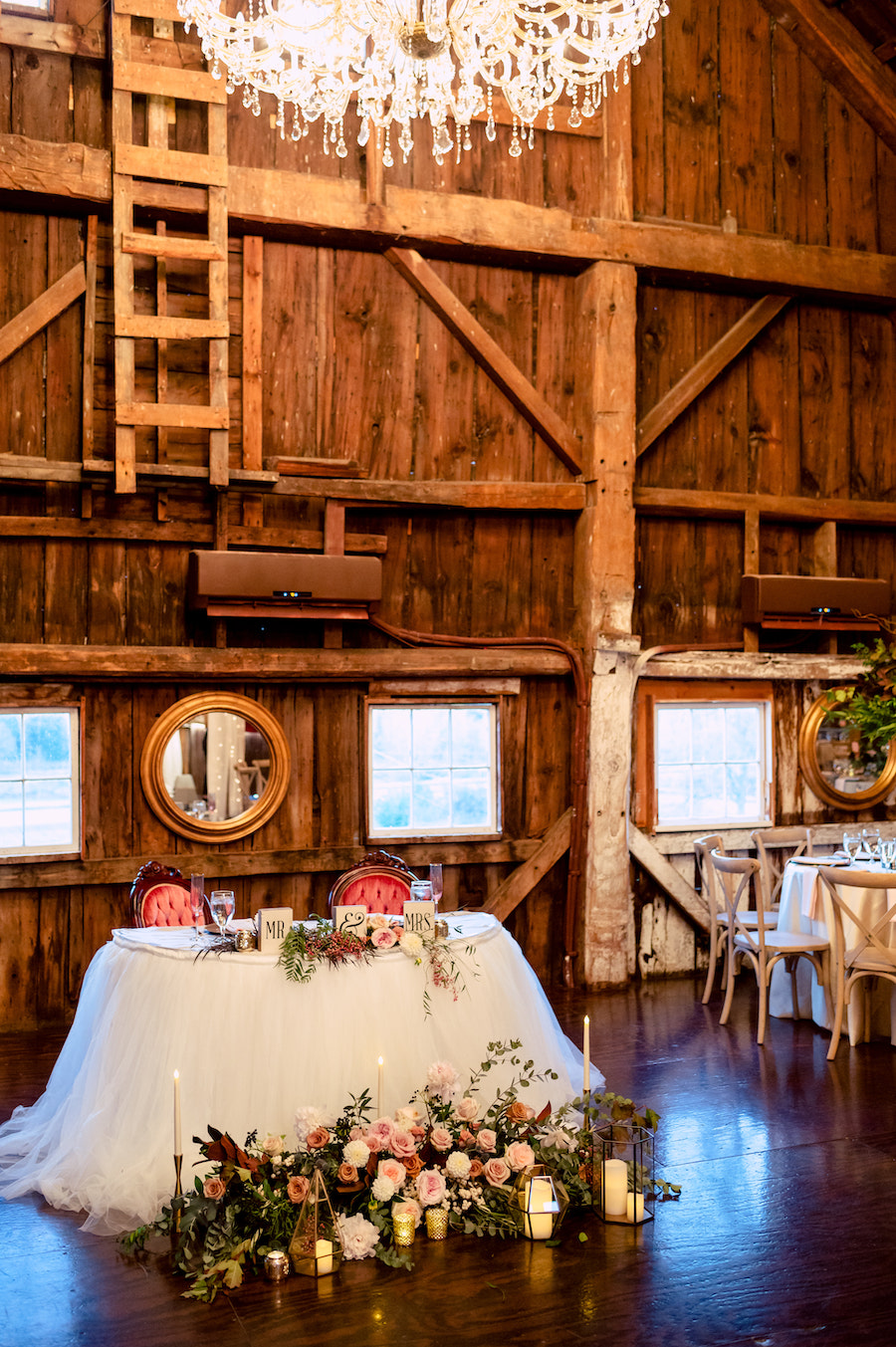 Katelyn and Kyle decorated their sweetheart table with a tulle tablecloth, velvet chairs, and a floral installation surrounded by tea lights and other candles. “It was one of my favorite focal points of the reception barn,” Katelyn says. 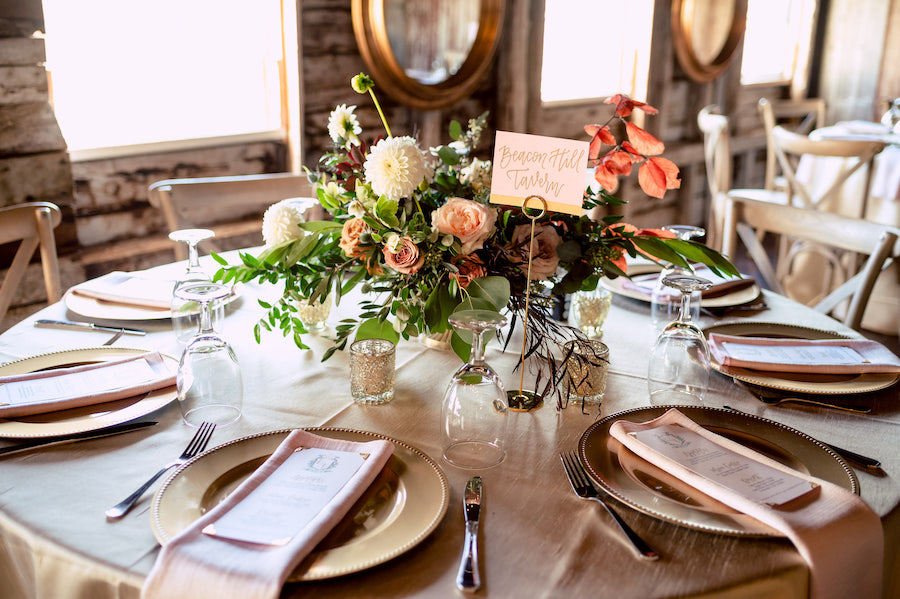 The bride and groom topped reception tables with shimmering, champagne-hued table cloths, light pink napkins, and gold chargers. They also named each table after a location that was meaningful to their relationship; Katelyn wrote a description of the place’s significance on the back of each sign.

The pair’s wedding cake featured cookie dough (the bride’s favorite flavor) for the bottom layer, plus triple chocolate, the groom’s choice, for the top layer. 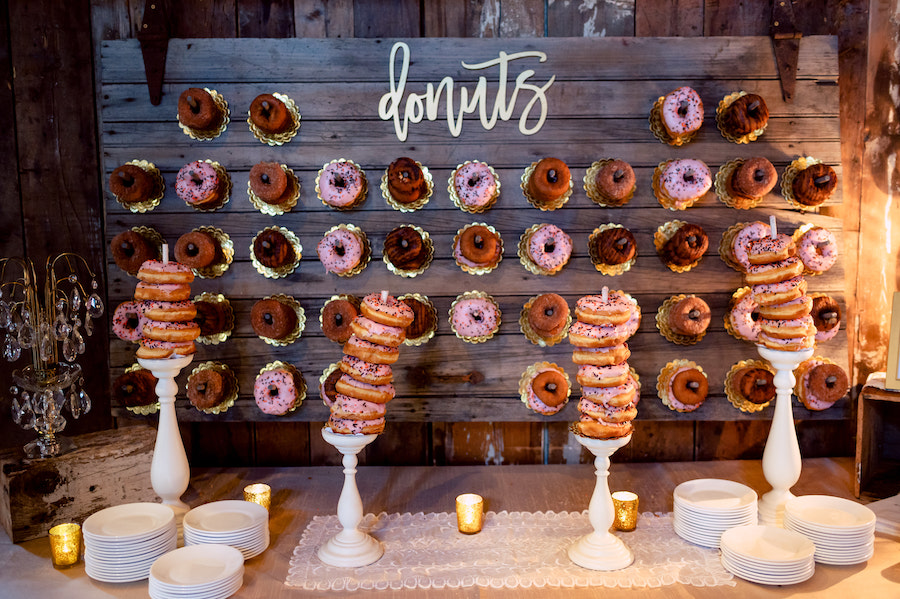 “We had the small cake because we wanted that traditional element, but adding doughnuts was a bit more fun and playful,” Katelyn says of the couple’s dessert spread. The team at Bishop Farm created their doughnut wall, which featured apple-cider confections and Dunkin’ strawberry-frosted treats, using a piece of reclaimed barn wood. 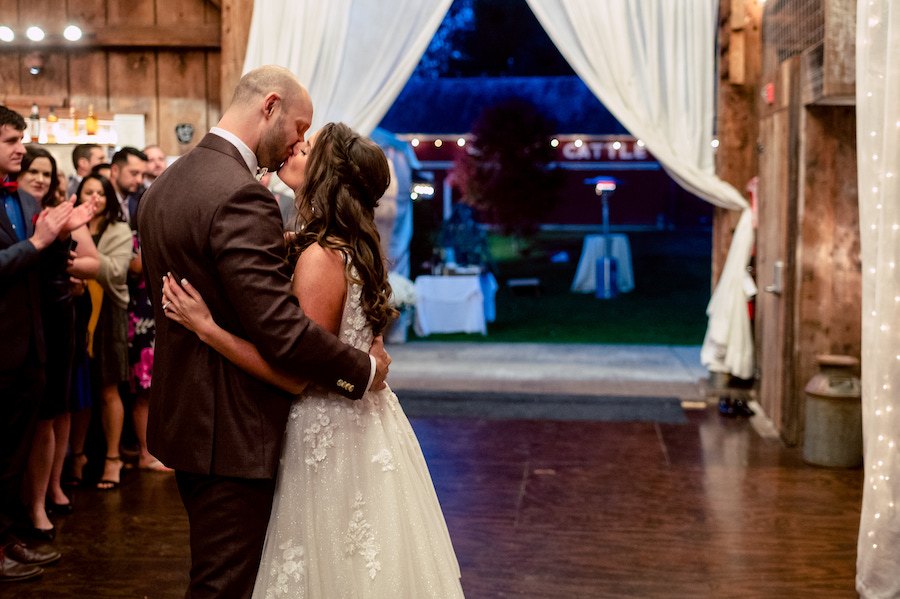 Kyle chose the couple’s first dance song, “Blessed” by Thomas Rhett, and kept it a secret from Katelyn until they took to the dance floor on their wedding day. “He wanted it to be a gift to me in that moment, and I think he was thinking that this was a song that really captures the essence of our relationship,” Katelyn says.