A Guide to the Athenaeums of New England

The Boston Athenaeum is only the beginning.

Athenaeums are a sort of studious sanctuary. Named for the Greek goddess of wisdom, Athena, they’re defined as membership libraries dedicated to research and the promotion of learning. Their numbers are dwindling, with less than a dozen left in the United States.

Boston’s own famed athenaeum is a true gem—indeed a scholarly, rare book-filled haven. But for curious bibliophiles yearning to explore elsewhere, many of the country’s remaining time-honored shelves are located in New England. Here, we highlight seven athenaeums in the area. Founded in 1807, the Boston Athenaeum has more than 500,000 books, including the largest portion of George Washington’s collection in the country, and a book bound with human skin. New Hampshire’s seaside book nook was incorporated in 1817. It boasts a 40,000-volume library, and has a comprehensive collection of materials that tell the history of the state’s only major seaport—Portsmouth. Once located in the building that Peabody Essex Museum now inhabits, the Salem Athenaeum moved to its current location in 1907. We recommend kicking back with some witchcraft writings for a truly spellbinding experience. The Redwood Library and Athenaeum is the oldest U.S. library still occupying its original building. Founded in 1747, the library now has almost 1,600 members. Photo by Don Shall on Flickr/Creative Commons

Home to books, Hudson River School paintings, and a few magnificent spiral staircases, Vermont’s St. Johnsbury Athenaeum was created by the Fairbanks family in 1871 with wealth from inventing the world’s first platform scale. Technically the Nantucket Atheneum is a public library, but it was founded as an atheneum in 1837. A former gathering place for abolitionists, the atheneum became a public library in 1900—decades before the Berkshire Athenaeum in Pittsfield did the same. 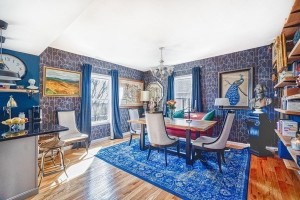 On the Market: A Colorful Art Deco-Inspired Home in Winthrop