The Hub on Causeway Is Finally Open for Business, and You Have to Check it Out

With new apartments, restaurants, and a grocery store, North Station's massive development has evolved the spot into much more than a T stop. 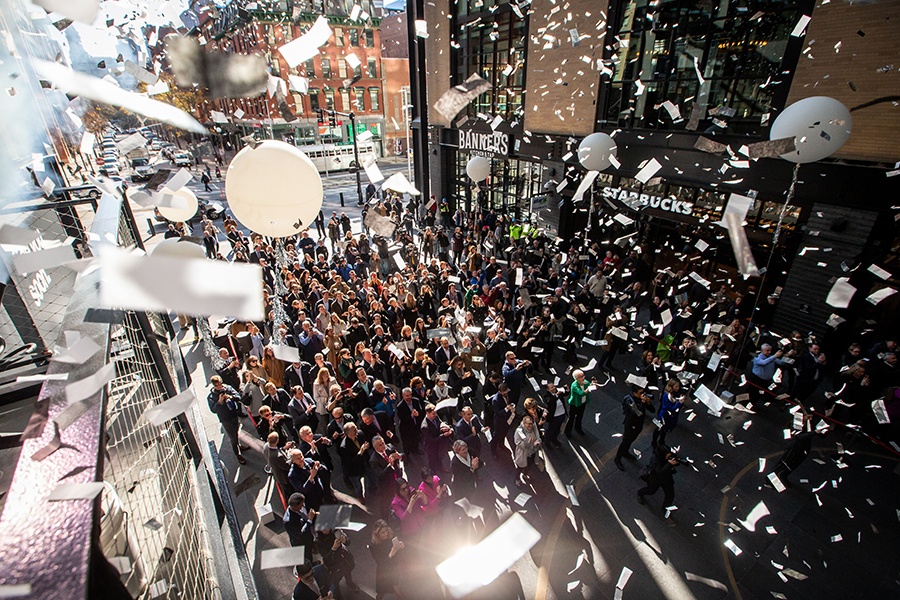 If you want to see a movie, need a place to live, have to buy some eggs and bread, want to taste a Guy Fieri-approved taco, or gotta watch the game on an impossibly large television—you can now do it all at the Hub on Causeway.

Have you walked by North Station recently and wondered what all of the buzz about the new complex was? With today’s ribbon cutting signifying the official opening of the Boston Properties and Delaware North joint venture, you can now take the T over and see for yourself. North Station is now almost unrecognizable thanks to an approximately 1.5 million-square-foot development of mixed-used space right above the subway and between the West End and North End neighborhoods. “It’s one of the most exciting developments in the city of Boston,” said Mayor Walsh shortly before cutting the ribbon, “[In part] because it connects neighborhoods.”

For those looking to live within this newly developed enclaved—and within shouting distance of the freshly-expanded TD Garden—Hub50House rises 38 stories above Causeway, offering 440 rental units. The luxury apartment building boasts perks such as a rooftop pool, a “woof deck” and pet spa to pamper your dogs, a “skyline deck” for humans with an outdoor kitchen and televisions, and much more across its three amenity floors. Already 25% leased, the complex has housed tenants since October, and will officially open next week.

But some of the most alluring parts of this new rental option are its proximity to the other pieces of the Hub on Causeway. There’s a sparkling 60,000-square-foot Star Market (with an adjoining Starbucks, of course) situated below Banners Kitchen & Tap, an upscale sports bar with a massive (we’re talking 40-feet diagonally—so large it had to be assembled in pieces) TV screen. Across the court is Guy Fieri’s Tequila Cocina, where concert-goers can grab dinner before heading next door to catch a show at Big Night Live, a venue with a capacity of 1,500. And renters who are also sports fanatics may be most interested in the apartment building’s “HubClub” perks program, which grants tenants access to Rafters, TD Garden’s brand new party deck, as well as “VIP experiences” at Big Night Live and ArcLight Cinemas.

Should any Hub50House dwellers have visitors in town, though, be warned: They may not be able to bunk up with you in your “metro” apartment, the smallest and cheapest (starting at $2,430) option in the building, which takes up just 370 square feet. But conveniently, Amsterdam-based CitizenM is the development’s on-site hotel, where guests can grab a room for the weekend. And of course, Hub50House offers non-micro-units, too. Studios start at $3,000-plus, while the three-bedroom penthouses go for just under $10,000 per month for more than 1,500 square feet.

And while the city celebrated the Hub on Causeway’s official opening today, there are still a few elements yet to open their doors. ArcLight Cinemas, a movie theater with 15 screens and tasty popcorn flavors sourced from local chefs, will start screenings in late November. And Hub Hall, a much-anticipated addition to the city’s upswing in food halls, will unleash its slew of stalls during the first quarter of the new year.

The final phase of the massive construction project will be a 31-story office building, 17 stories of which will be used by Verizon, slated to be completed in 2021.