This Robot Wants to Carry Your Groceries for You

The creators behind gita, a non-autonomous robot, hope it'll make people get outside and walk more. 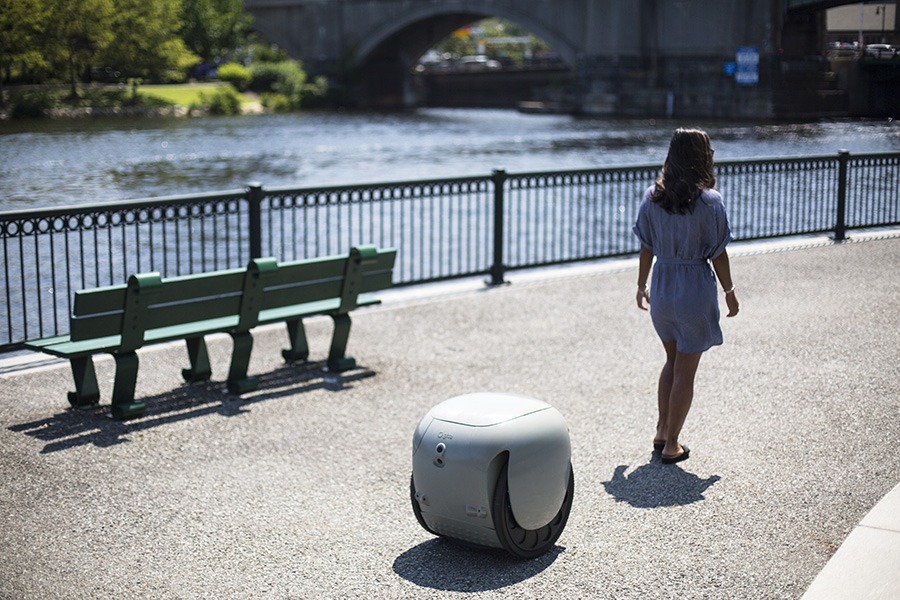 As a Bostonian, your commute is probably a pretty important factor in deciding where you work, play, and live. And having an easy one, especially in a city where driving three miles means waiting in 45 minutes of traffic, is a coveted treasure. That’s why Charlestown-based Piaggio Fast Forward (part of the company that created the Vespa) wants you to ditch the car keys and opt for pedestrian travel, with the help of a little robot companion called gita.

Gita, which in Italian means “short trip,” is a 50-pound robot that looks much like a cooler on wheels, that can carry up to 40 pounds of your belongings. Like a loyal four-legged companion, it follows right behind you as you walk using sound, light, and touch technology.

Set to launch on November 18 for a retail price of $3,250, co-founder Greg Lynn says Piaggio Fast Forward was founded to “create lifestyle-transforming mobility solutions, allowing people to move with greater freedom in their neighborhoods,” he says.

Examining why people were moving to the places they were moving, he saw that cities like Nashville, Boulder, and Austin were exploding because people who live there have a “20-minute lifestyle,” meaning everything they need is within a 20-minute walk of their front door.

“Instead of getting in a car to pick up milk or take your kids to soccer practice, why couldn’t you just walk there if you had something to carry your stuff?” Lynn offers. Here in Boston we might not have a “20-minute lifestyle,” but we do have rampant traffic issues and often-struggling public transit, and one of the solutions might just be a different way to walk. Gita poses an interesting alternative—yes, it’s $3,200, but that’s an awful lot cheaper than using a car to transport your groceries.

The goal is for the robot to be very user-friendly. Unlike other types of technology, gita doesn’t use screens or voice response, and you don’t need much of a manual to operate it. With only two buttons, one to turn it on and one to get it rolling, gita senses its environment (and you) using a camera. Once paired with its leader, it will continuously follow without interruption and match your pace, until you turn it off or move outside of its 15-foot radius.

“When you are followed for the first time, two things happen,” Lynn says. “First, you start smiling like an idiot because it’s just weird and second, it becomes a very socializing experience. People will ask you, ‘Hey do you know you’re being followed by a robot?'”

The inherent socializing aspect of the product is one of the things the developers enjoyed about gita during the early beta-testing of the product. When the Piaggio team had gitas to test for a weekend, they took trips to the park and loaded gita up with food, drinks, and toys or went to a farmer’s market.

Without being holed up in a car or train station, and by stowing your phone in the cargo bin, gita allows you to look around at your surroundings, and other people, at all times. It also empowers families, people with disabilities, and anyone else who wants to live an active lifestyle to do so with fewer barriers.

Gita traverses any walkable path, indoors or outdoors, and Lynn promises it even manages the cobblestones in Boston pretty well. Right now, it can’t operate through sand or snow and might run into a little trouble in a torrential downpour. It doesn’t climb stairs, but can move up and down slopes at up to a 16 percent incline.

With a rechargeable battery that lasts about four hours, gita can be completely recharged in about two hours. It even has a phone charging port port inside, for charging other electronics. And of course, the robot comes with a mobile app called mygita. Through the app, you can easily share pairing capabilities with friends and family, lock and unlock the cargo bin lid, stream and play audio, and receive notifications about gita’s battery life.

Lynn makes it clear that gita is not to be confused with autonomous delivery robots, like the ones Postmates or Amazon employ, and or the ones San Francisco has banned. “When we started in the space we wanted to add value beyond delivering a burrito to your front door,” he says. “We found commuting to be a more serious problem.”

With the somewhat controversial rollout of delivery robots and motorized scooters in many cities, Lynn is quick to point out that Piaggio Fast Forward abides by local pedestrian legislation. There is no law about being followed by a robot, Lynn tells me, but there are laws about sidewalk speed.

Lynn explains that most states, including Massachusetts, don’t allow anything/anyone going faster than 15 mph on the sidewalks (mostly to inhibit bikes and scooters). Gita can only get up to 6.5 mph. Lynn does hint at a future product that would go faster to follow runners and/or scooters, but he wants to make sure people understand what gita is before introducing a faster model.

The Piaggio team is in the process of adding three more colors, as well as wraps designed by local artists. They also plan to look at collaborating with other companies to put lids/organizers/etc. in gita to make it useful for catering businesses, offices, or anything else you want to use gita for.

While the future of transportation may be complicated in Boston, it never hurts to entertain some more possibilities in our lives. And that’s really the point of gita: getting you to move more, play more, and socialize more with the people and things around you in whichever way you choose to do so. 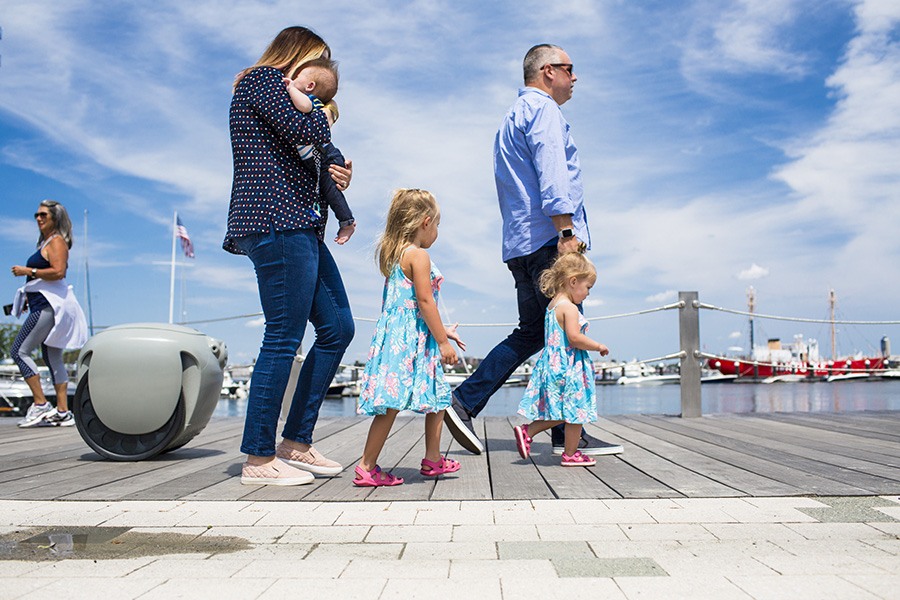 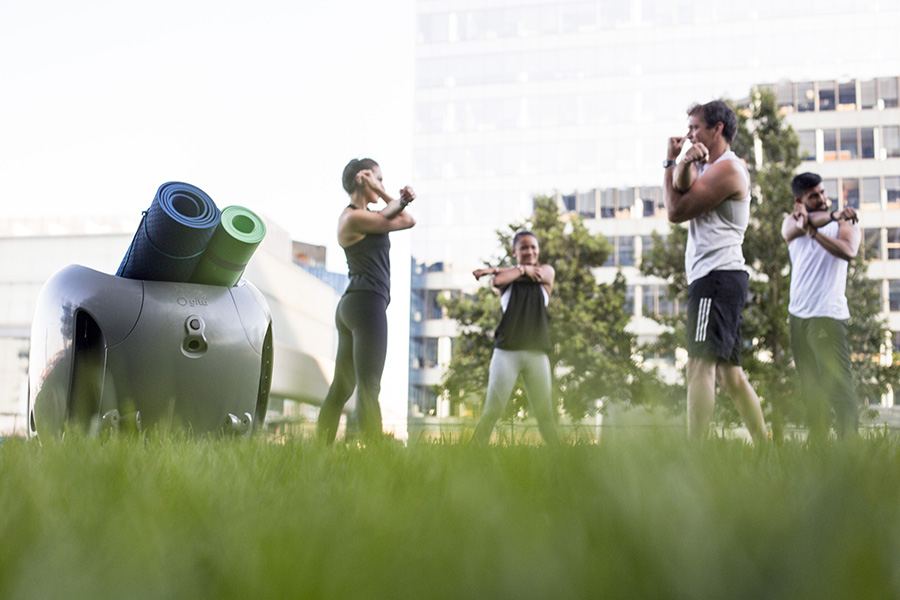 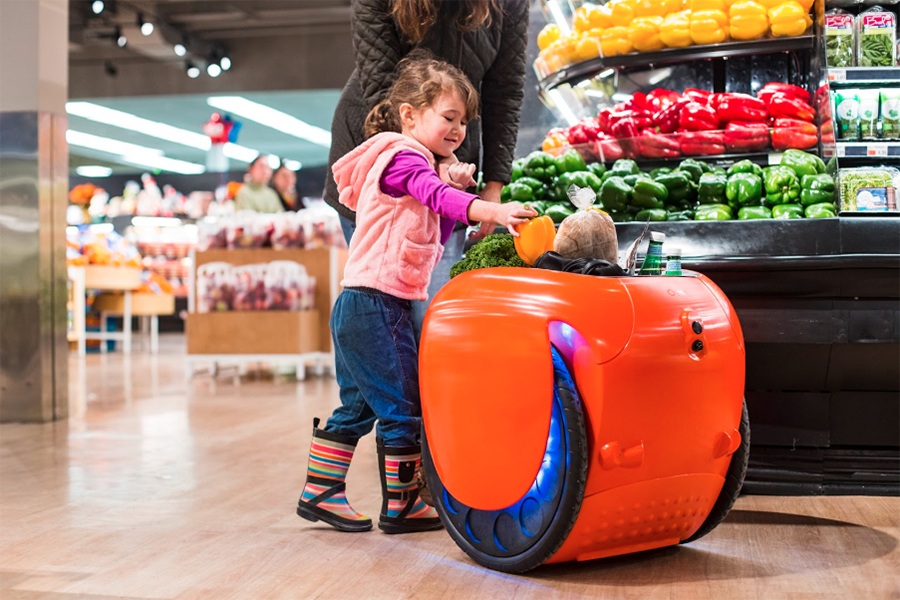